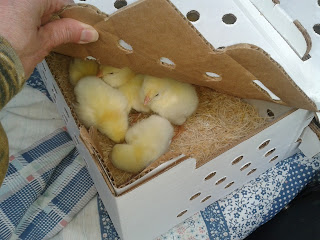 Summer chicken season is here.  That means I've got meat chickens here on the farm as well as the layers.  The first batch of meat chicks actually got here the first week of May so they are well beyond the cute fluffy chicks that were delivered to the farm in a box from the US Postal Service. 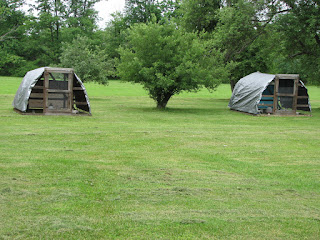 Last Monday the 4 week old meat chickens were moved out to their new home on pasture.  My goal is always to get them out there at around 3 to 3 1/2 weeks, but the weather never seems to cooperate.  I always like to have a couple days of dry sunny weather strung together when I first move them out.  Truth is they are much easier for me to care for when they are in the brooder pen vs out on pasture so I never grumble about moving them a little later anyway.  My mind and body always seem to object to having to get up a little earlier for those first few days of taking care of them on pasture, but after I adjust, I really enjoy my time outside in the mornings.  Bird song fills the air and each sunrise is unique and beautiful.  The young rabbits are out and about in the yard and everything is green and lush.  My mornings taking care the birds out on pasture become one of the favorite parts of my day.  Well after I adjust to getting up earlier. 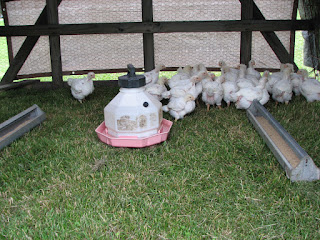 Although I would love to raise meat chickens in larger numbers, the fact that I have a full time job off the farm limits how much time I have to care for them so I only run two pens of 20-25 chicks each at a time.  I am always amazed how I can take 50 chicks that have been living together in the brooder pen, split them into two different pasture pens and each pen takes on a different personality.  I had three kind of runty chicks this time around so I put all three of them in the south pen so I could keep tabs on them.  They all seemed to perk up and start doing better on pasture, but I did have to put one of them down this morning when its legs gave out.  That is a job that I will never get used to.  The other two have taken off though and are almost caught up to the others.  The south pen is a little bit dumb about walking along as I move the pen each morning but they are pretty calm.  The north pen on the other hand are my flighty chicks.  Every time I walk in the pen to feed they all go scampering toward the back of the pen in a fit of panic.  But when I move the pen, they eagerly walk along with the pen and run into the fresh grass.  Two pens of chicks, two different personalities. 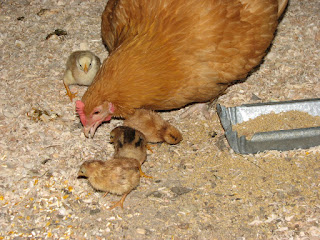 The other poultry news on the farm is some new additions thanks to a broody hen.  I almost always raise production type brown egg layer hens and while they are egg laying machines, these hens do not stop laying to sit on a clutch of eggs, ever.  Even some of the standard dual purpose breeds that I have raised in the past, like Barred Rocks and Rhode Island Reds, will sit on eggs only rarely.  Several years back I did have a Barred Rock hen that went broody every summer and I let her hatch some eggs.  Then the last of my roosters died so that ended that.  And Mama Chicken as I called her finally died last summer.  When it came time to order some new layer chicks, I ordered a couple roosters and a few Buff Orpington pullets as Buff Orpingtons tend to be one of the more broody standard sized brown egg laying breeds.  Last month one of the hens did go broody on me and I set some eggs under her.  I had moved her into her own pen and in hindsight, I think I chose a bad location for her to set and I THINK she probably had trouble keeping the eggs at an even temperature.  Even so, she hatched out 4 chicks and they are so stinkin' cute.  I really enjoy having a mama and some chicks on the farm again.  I'm hoping another one or two of my Buff Orpingtons will want to set this summer so I can hatch out a few more. 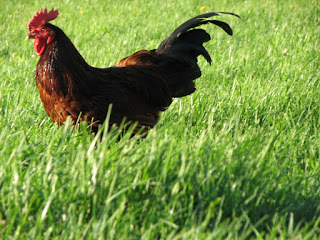 The rest of the layers are going along doing their thing.  I try to keep two age groups of hens and my older hens are really starting to slack off on the egg laying.  They are destined for the stew pot this fall and new layer chicks will be ordered to replace them.  The chicken cycle continues.  I'll end the blog with one of my handsome roo's out in the grass.  I love the cock-a-doodle-doos that serenade me every day when I am outside doing chores.

Posted by Diane Hiener at 8:24 AM No comments:

Full speed ahead, for the most part.

Lots of pictures in this one!

The month of May was a pretty good month for the most part.  The best part is that the entire field got prepped this month.  Quite a difference from last year when we were still pulling plastic mulch up in late June.  Or who could forget 2011, the year it wouldn't stop raining, when the field looked like this on June 29th. 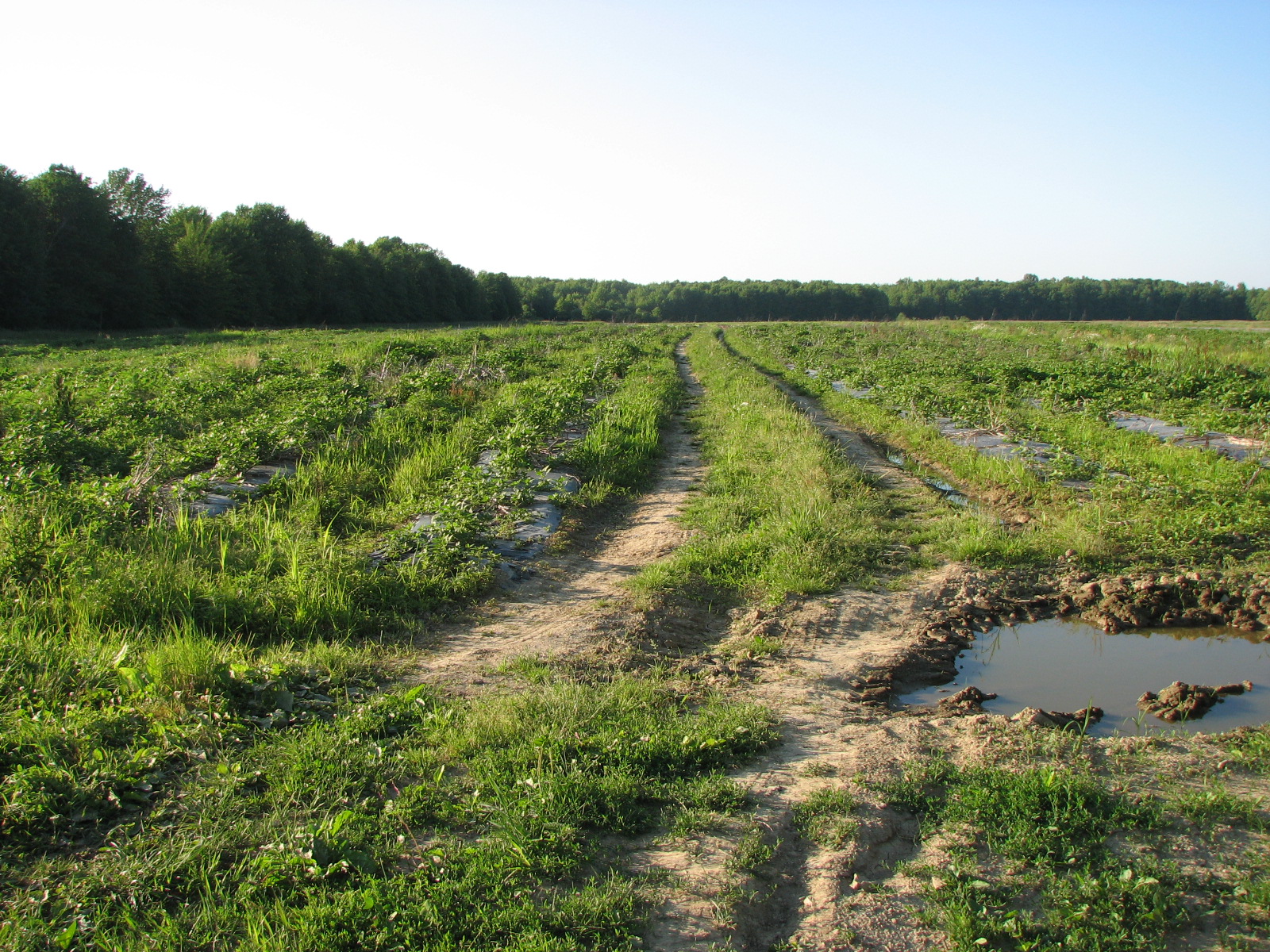 But lo and behold the first plow went in the ground on May 2nd of this year. 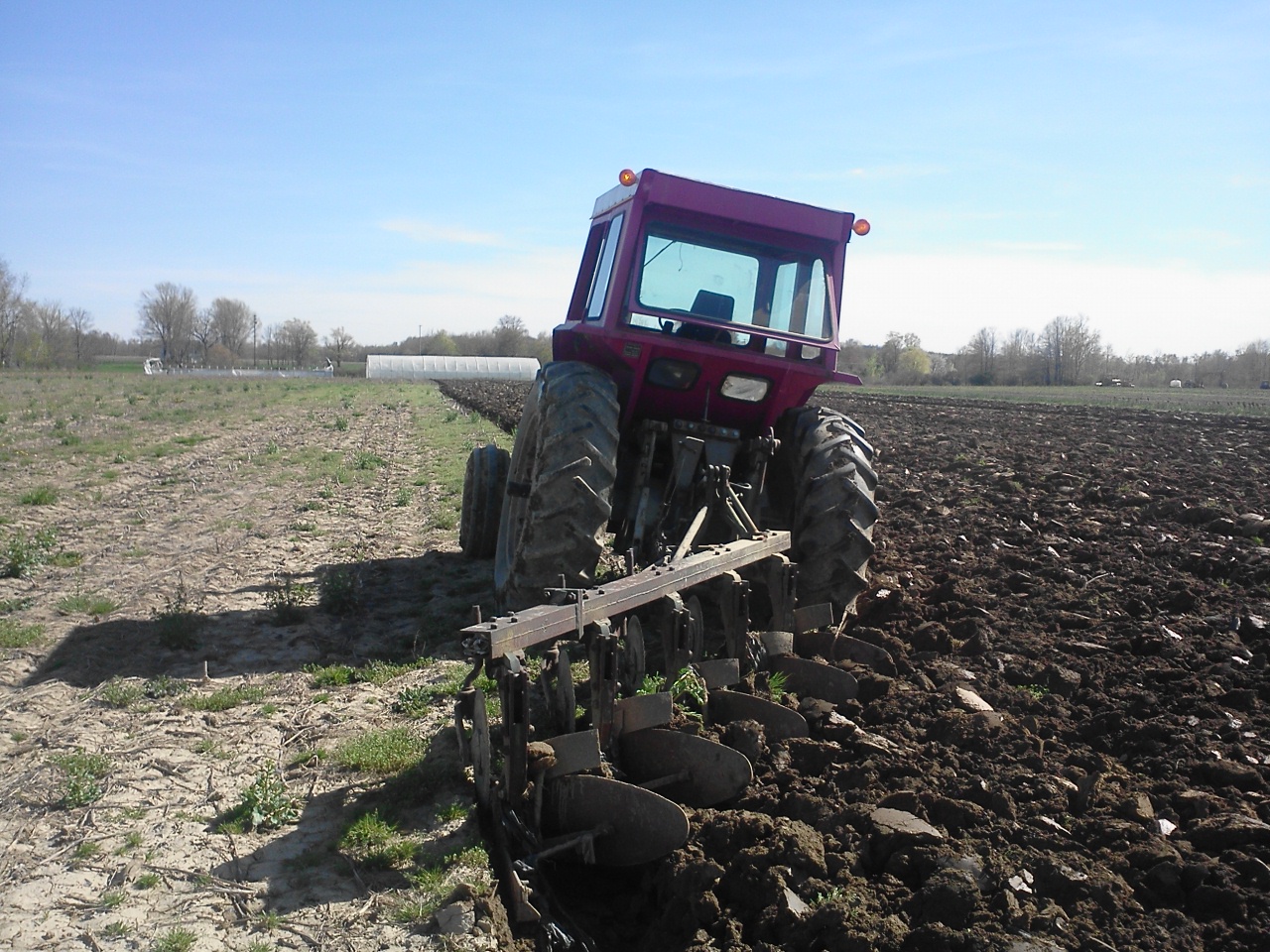 And by May 20th, the entire vegetable field was prepped and some sections were even planted.  It really helped out that we switched to using biodegradable mulch last year for the most part and only had a few small sections of plastic mulch that needed to be pulled up. 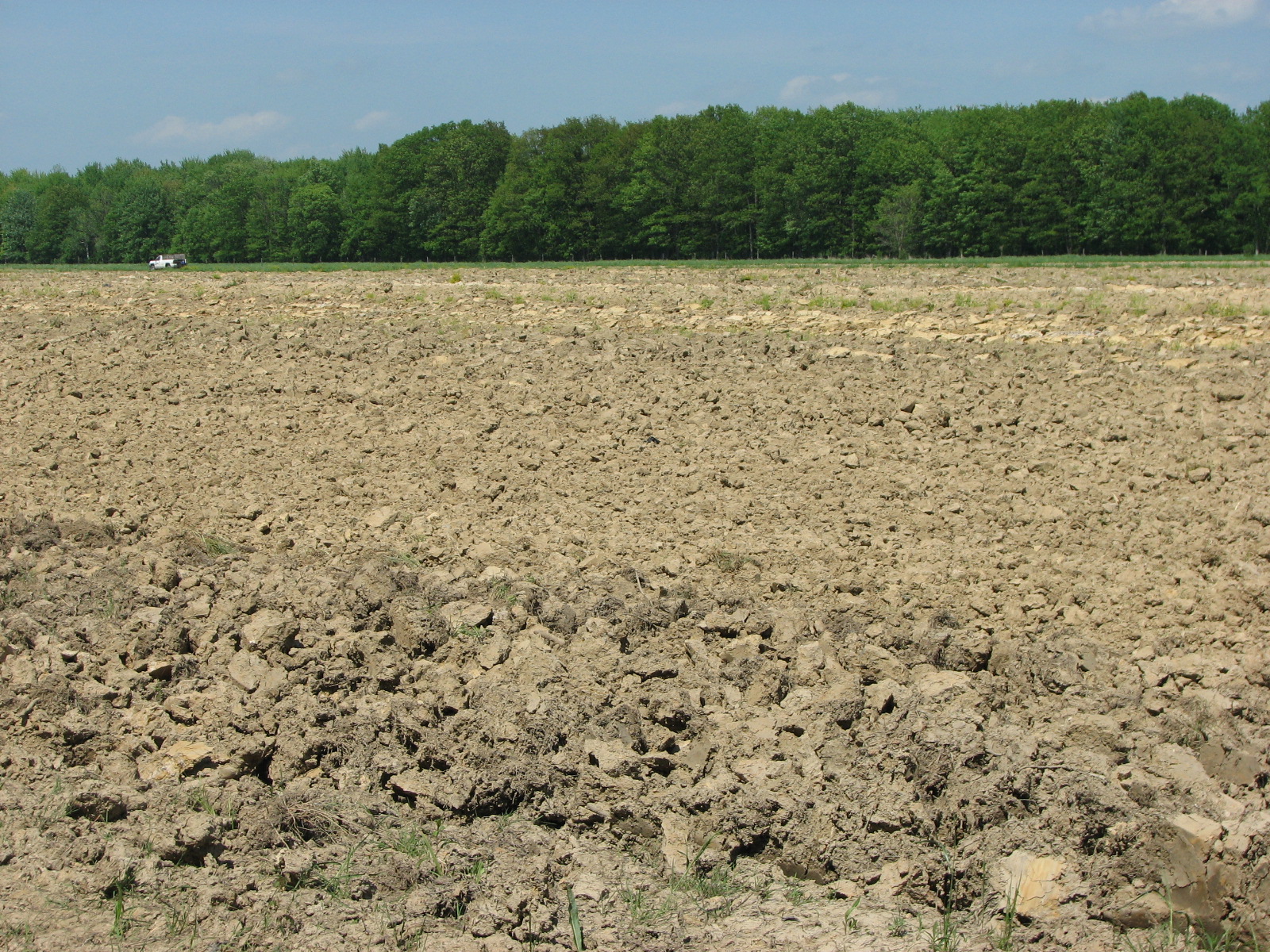 Some of the earliest plantings were the onions and shallots.  Mike had been brainstorming over the winter to figure a way to put the onions on plastic since they always grow with so many weeds around them.  He came upon a yard aerator that was on clearance. With a little shifting of this and that, the aerator is perfect for poking lots of evenly space small holes in the plastic mulch perfect for planting onions.  All this was accomplished on May 9th. 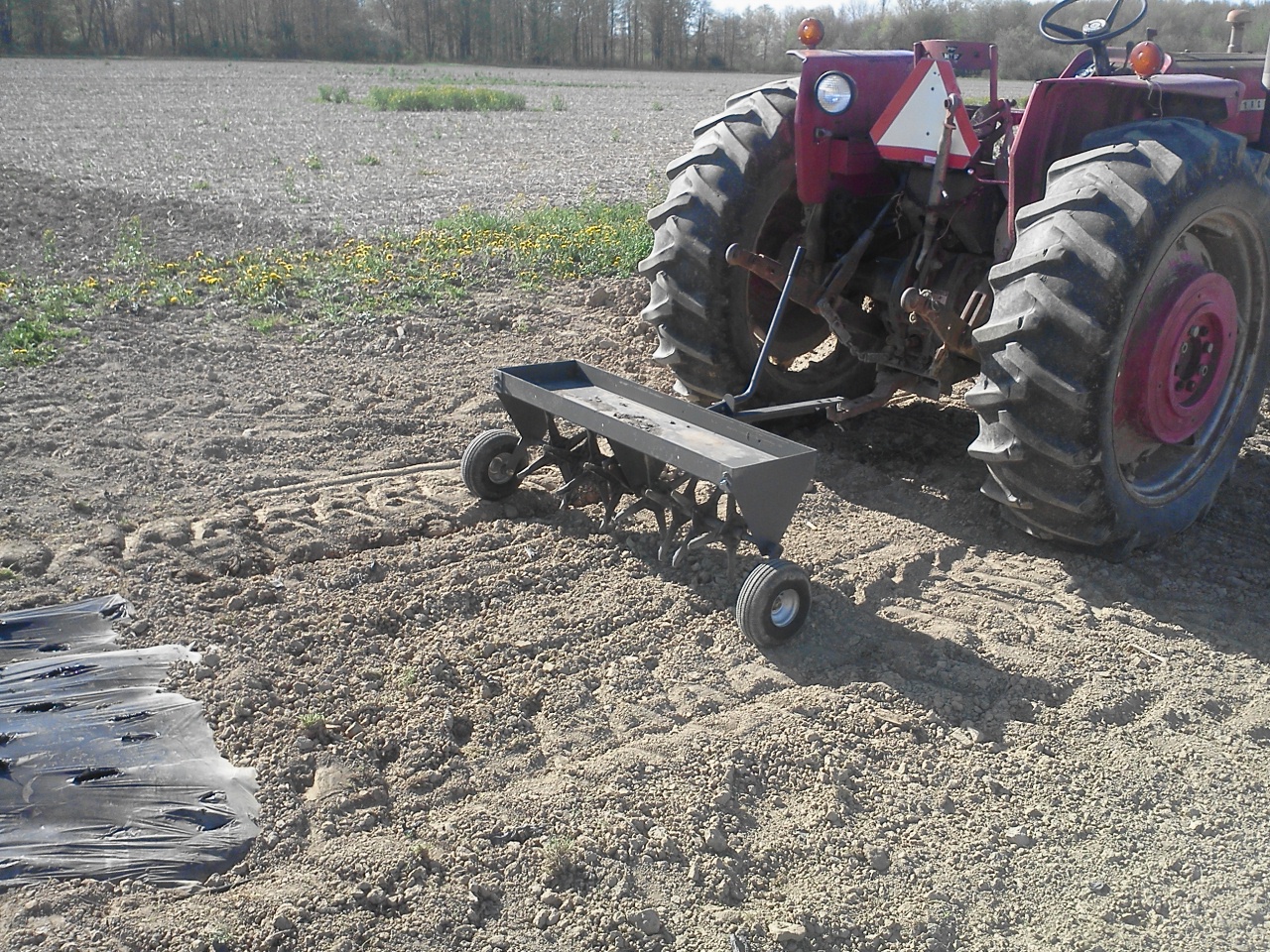 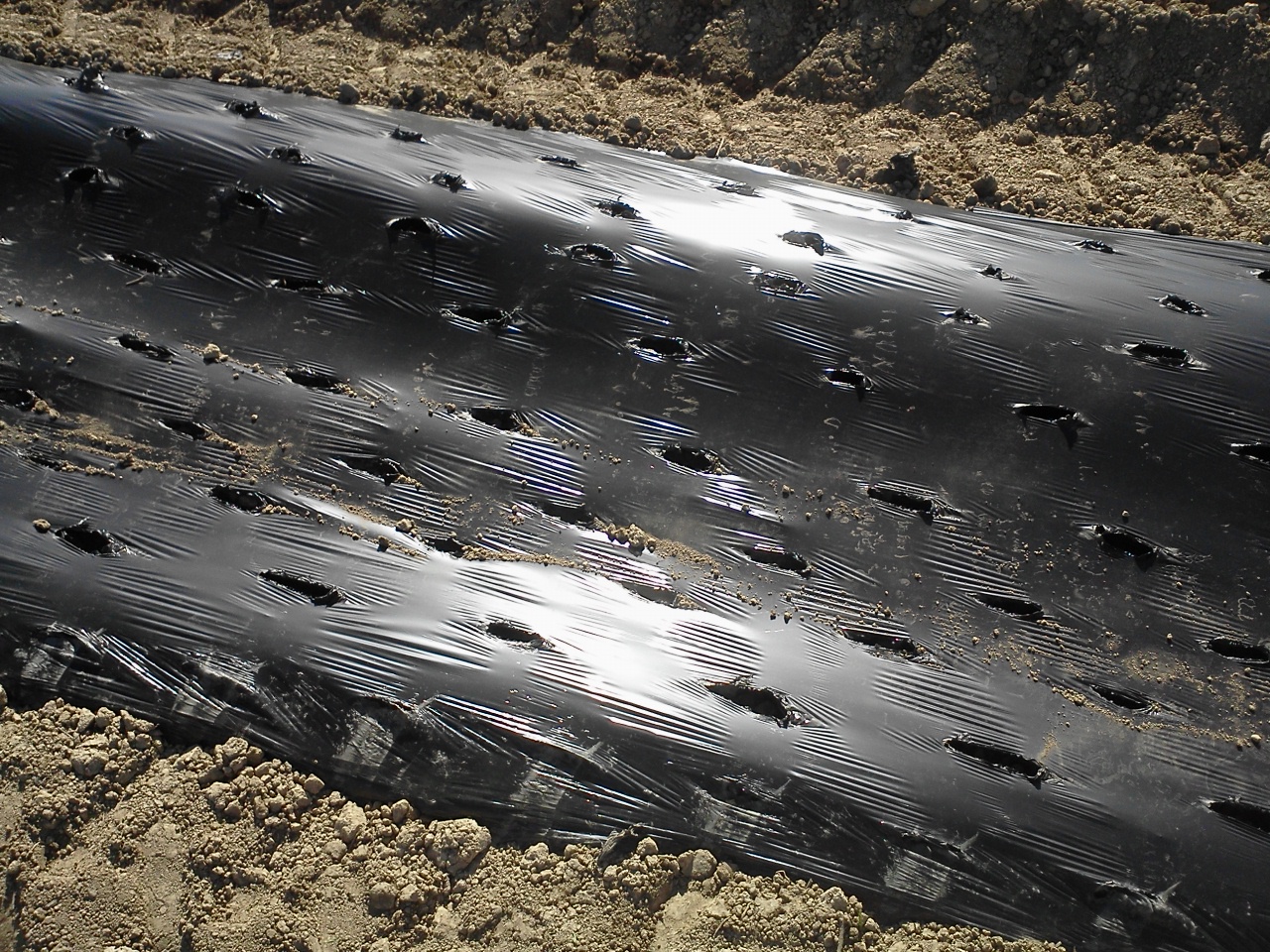 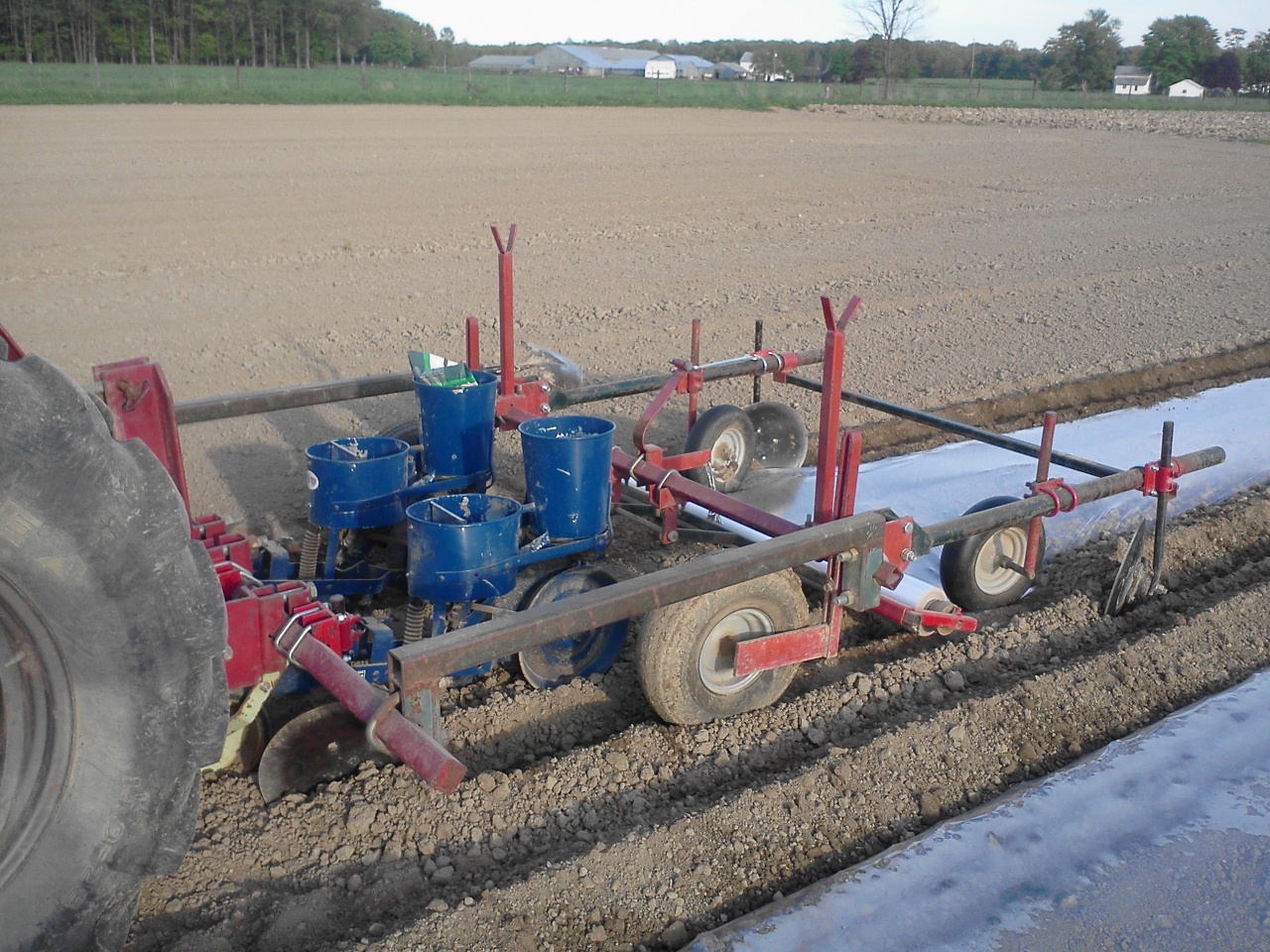 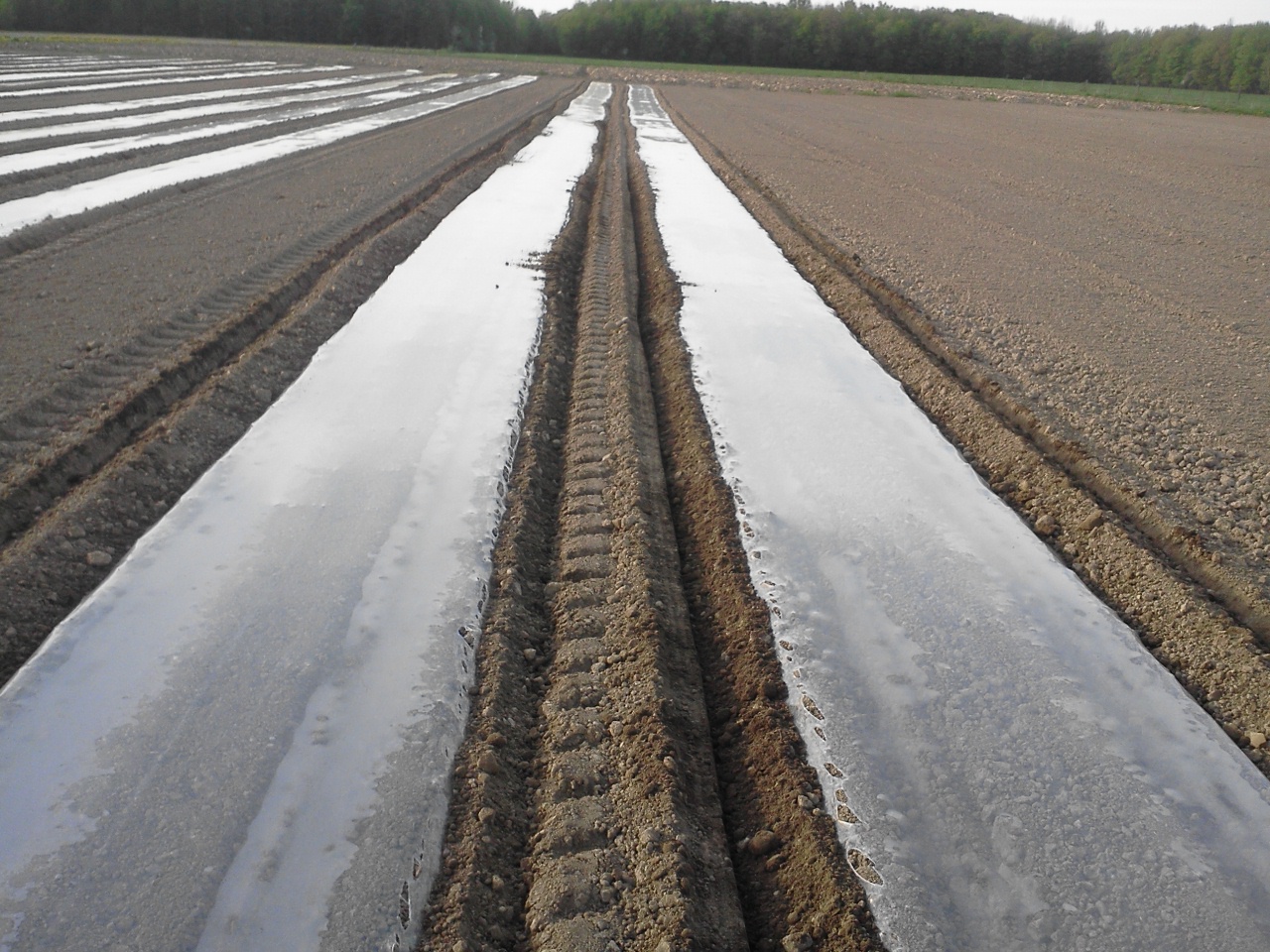 By mid May, Mike was able to go down to southeastern Ohio to bring home the tomatoes and early broccoli that his mom had started for him in her greenhouse.  Our yearly rotation of hay wagons filled with flats of plants sitting in our yard has begun. 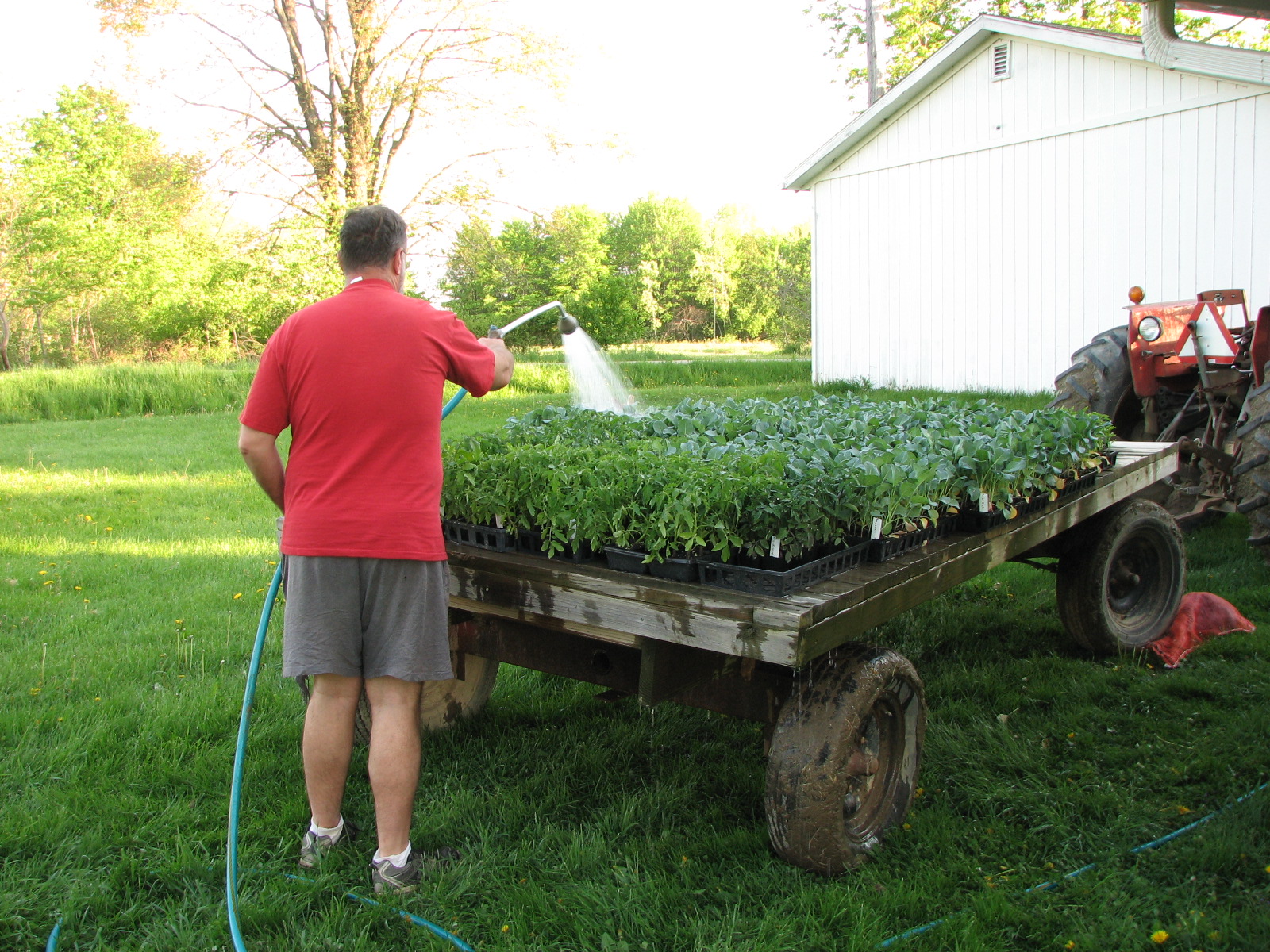 A few days later most of the tomatoes and some peppers were planted in the high tunnel. This picture was taken on May 20th.  They look a little scraggly in the picture because they were just newly transplanted, but today they are growing and all the tomatoes have been staked.  I suppose I need to wander back in my spare time and take a more up to date photo.  Might be awhile. 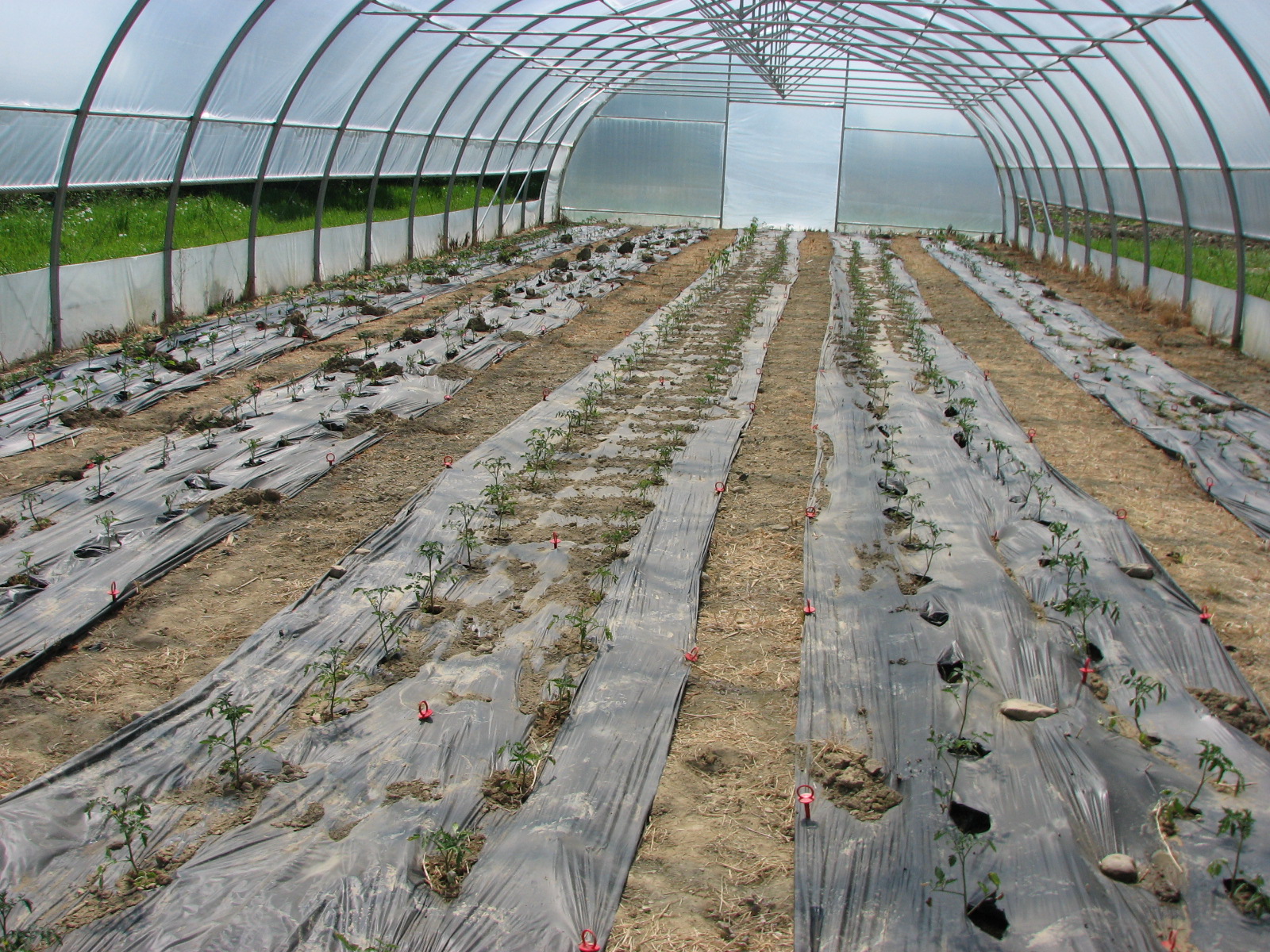 Also on May 20th (or actually the day before I think?), the plastic was cut off the corn and the beans.  At this point in the month the fields were really dry and we were hoping for a tad bit of rain to help things along.  I checked back in last year's blog and the early sweet corn is a few days ahead of last year's schedule. 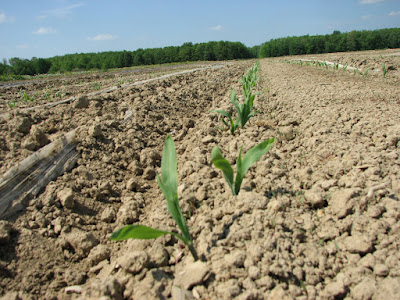 Shortly after the pictures from May 20th, we started getting some rain. The last two weeks have been a lot of start and stop.  All the lettuce got planted right before Memorial Day weekend.  Then we had three days in a row with freeze warnings posted.  (Yes folks this is a fairly common occurrence for us to have frost right up to June 1st.)  For 3 days we had frost and were kind of worried about the beans and the corn.  They got a little stressed, but they did survive.  Mike was able to get a bunch of plastic laid and now we are on hold due to some fairly heavy rain this past weekend.  We've had a couple days of dry though and so fingers crossed that planting will resume tomorrow.

There is the month of May in a nutshell.  Way ahead of schedule compared to the last 2 years.  Onward to June!

Posted by Diane Hiener at 5:32 PM No comments: