The semi-myth of those stand up egg whites

The "kids" grow up so fast it seems.  Only 8 months ago, they were little egg-sized balls of fluff.  Now they are cackling and crowing young adults.  It's probably a good thing that we don't have any real close neighbors because when all the girls (and the two boys) get to "talking", the noise level in the chicken barn is quite loud.  So far this winter has been bearable.  We've had stretches when the ground is covered by snow, but we've also had several mid-winter thaws that have taken us back to green grass a time or two.  The chickens love being outside when the snow is gone. 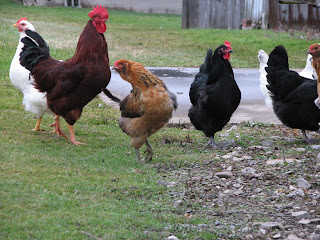 But when the snow is on the ground, they excitedly run to the barn door when it is opened and promptly come to a screeching halt at the edge of the concrete.  Sometimes there is a major chicken pile up with the ones in the back plowing into the ones in front at the edge of the snow.  Except for a few brave older hens, most of my chickens will not step foot on snow. 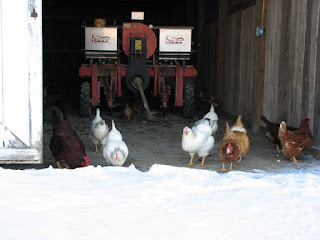 Right now we have about half of our older hens laying as well as the majority of the 8 month old birds.  I even bought a few Americaunas for the first time and their green eggs are a big hit with the kids that show up at the farmers market with their parents.  And talk about a variety of size.  When chickens first start laying eggs, the eggs are small.  Gradually the eggs increase in size.  My older hens are laying a lot of extra large eggs right now while the younger hens eggs are more medium in size. 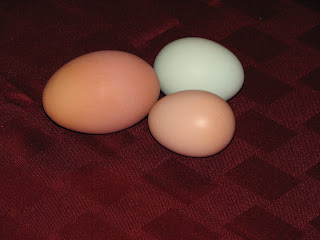 Now that the "youngsters" are laying regularly, I finally have the opportunity to write about the semi-myth of stand up egg whites and what that says about the age of an egg.  First you need to know there are actually four parts to the egg white.  Two of those parts are closely associated with the yolk.  The other two parts are the egg white that is seen when you crack an egg open on to a frying pan.  There is a thick gel-like part closer to the center and then a thin watery egg white that spreads to the outside.  As an egg sits in your refrigerator, it gets older and as an egg gets older, that thick gel-like part of the egg white gets thinner and flatter.  Therefore it is often written that if you crack open an egg and the egg white is watery and does not stand up tall then that egg is old.  This is true for store bought eggs that are graded when they leave the farm.  But there is a HUGE exception to this rule of thumb that is often seen in eggs that come from small backyard flocks.  These are the eggs that will often be for sale at farmers markets.

Several years back I had a customer complain that the eggs I was selling were old because the egg whites were very watery.  That is what he had been told and probably what he had experienced with his store bought eggs.  Well we sell out our eggs every week at the summer market so the absolutely oldest egg is seven days old.  I collect them, I wash and sanitize them and into the refrigerator they go.  So why would I be selling eggs with watery egg whites?  The answer is that I have hens in my flock that are much older than in commercial flocks.  As hens get older, egg whites have more and more of the thin watery part and less and less of the thick gel part.  Some hens have eggs that do this more than others.  When I look at my eggs in the egg basket, I can tell you which eggs will have thick stand up egg whites and which ones have thin watery egg whites.  Since there is no difference in flavor or nutritional value in eggs from older hens, I choose to keep my hens for an extra laying season compared to the big egg farms.  It is what I do. 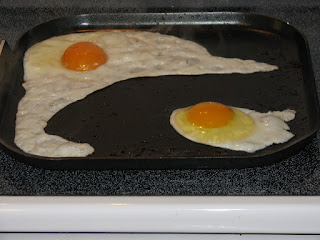 So there you have it.  If you buy eggs from someone who has a small flock of chickens and happen to get some eggs with watery egg whites, those eggs are more than likely not old eggs.  They are just eggs from old hens. Same farm fresh tasty goodness.
Posted by Diane Hiener at 12:14 PM 1 comment:

A little education. A little bit of local food movement.

Winter on the farm may not involve much work in the field, but there is a lot of behind the scenes work going on.  Last week Mike went to his third vegetable grower conference of the winter.  This one was in Hershey, PA and he got to spend the week learning all sorts of new things and eating chocolate.  What sort of things do vegetable farmers learn at conventions?  Some examples from the Hershey conference were seminars on storing vegetables for winter markets, growing sweet potatoes (haven't done this yet but are planning for this coming season), and field tests on growing seeded and seedless watermelons side by side. 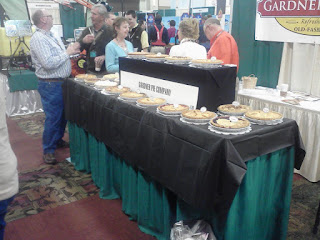 Around mid-conference, I asked Mike to send me a picture of the conference so I could post one to the farm's Facebook page and this is what he sent.  The man does love his pie.  He also seemed quite fond of letting me know what he was having for dinner each night.  Tuesday night was especially memorable because the text message he sent couldn't have been timed more perfectly.  I had worked a little later on Tuesday and didn't get home until close to 7pm.  The temperature had been above freezing for the second day in a row and it had rained most of the day.  I was in a hurry to just get out to the barns and get chores done and over.  As I crossed the driveway and headed to the chicken coop, the light rain became a steady downpour.  As I walked through the yard, I could feel my feet squishing in the muddy muck of all the snow melt and then realized that I had forgotten to switch into my rubber barn boots and instead had on my suede boots that I wear to work.  I was not going back to the house at this point though.  That's when I heard the text message tone on my phone.  I got to the barn and was thinking that while the chicken pens would be dry, I would be walking through wet shavings and bits of chicken manure near the doorway.  My poor suede boots.  Once out of the rain, I pulled my phone out to read my husband's text that read "Sitting in the nice restaurant here waiting for my steak.  Butter and chocolate flavored butter came with the bread.".  Lovely.  I'm soaking wet and my feet are covered in mud and chicken poop.  Yep, timing is everything or so they say.  The following day there were texts about French toast for breakfast and later about Yuengling beer, meatloaf and mashed potatoes.  At least I knew he was eating good while he was gone. 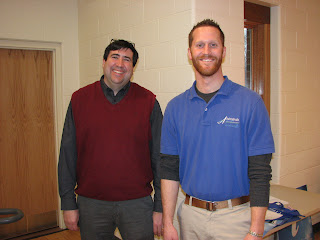 The other happening last week was a local meeting to promote the local food movement.  The meeting was hosted by Mark Winchell, executive director of the Ashtabula County Convention and Visitors Bureau and Dave Marrison, Ohio State University Extension Educator based in Ashtabula County.  A fine looking duo to be sure (that is Dave on the left and Mark on the right).  Anyway, the purpose of the meeting was to network local farmers with local restaurants.  Mark has a lot of ideas for promoting local Agribusiness and his enthusiasm for this project was fun to see.  Normally Mike would be the one to attend meetings like this, but since he was out of town eating chocolate flavored butter on his bread, he sent me.  This alone is kind of scary because while I claim part ownership of the farm, most of my farm duties involve taking care of the animals that live on the farm.  When it comes to the vegetables, I am best at cooking them and eating them.  Half the time I don't even know what is growing out in the fields.  In spite of my lack of knowledge, I went (armed with a notepad page of facts about our vegetable farm - Mike made me write this down ahead of time) and just had fun.  I got to talk to the chefs of several local restaurants as well as meet other farmers from all over the county.  One of the hardest parts of being in the business of farming is marketing one's product.  Us farmers are busy sorts and it is often hard to find the time to reach out to potential customers.  So a big thanks to Mark and Dave and the local restaurants that attended the meeting.

That about sums up the farming for the week.  Mike was planning on taking inventory of the Brussels sprouts still in the field.  All the snow melted while he was gone and all the snow came back on the day he got home so a thorough inventory will have to wait.  I'll leave this blog post with a typical winter scene from the farm.  Little ol' Peters Creek is slowly freezing over once again.  This is the view of the creek as it runs through our pasture and our high tunnel can be seen in the upper right hand corner of the picture. 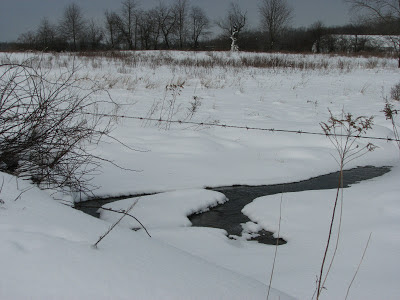 Posted by Diane Hiener at 9:04 PM No comments: