There are certainly smaller towns out there and it's not like Ohio is in the middle of nowhere, but I live in a small town.  Last census, I think our township finally went over 1000 people by a little bit.  There are no stop lights.  The center of town is a crossroads of two state routes with the tiniest of convenience stores on one corner, the township hall on another and two farms on the other two corners.  We don't have our own post office but instead our township is divvied up among the neighboring postal routes.  It is 15 miles one way to the nearest WalMart.  The closest grocery store is a little over 6 miles away.  Not too bad actually, but much different than the large suburban community I grew up in.  I love living in a small town.  It's very rare indeed that I miss the lights and noise of the city. 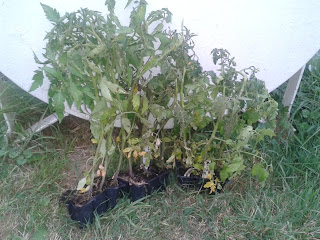 Since we moved out here, Mike and I have had lots of small town moments and today was a perfect example.  Mike and some of our Amish employees had been working on transplanting plants all morning.  Around noon they happened to be back near the barns loading up more plants when our mailman Kenny pulled into the driveway.  Usually the only time he does that is when we have a package that we have to sign for.  When Mike walked up to the vehicle, Kenny handed Mike three six packs of started tomato plants.  Seems as though Kenny was delivering the mail on the next road over.  On that road about 4 miles from our farm is where our neighbor with the greenhouse lives and she is the one that starts the majority of our vegetable plants.  (Is it still considered a "neighbor" when they live 4 miles away?  Yes, out here it is.)  Well, Kenny saw these tomato plants sitting on the side of the road.  He got out to take a look and there was a tag on them that said "Mike".  He said he couldn't think of anyone else whose plants they could be and so he picked them up and brought them over to our farm which happened to be on the continuation of his route.  Yep they were our plants that had fallen off the wagon yesterday when Mike had been hauling some more of our plants from the neighbor's greenhouses to our farm.  And so we now have had tomato plants delivered to us via the postal carrier.  They looked just a little bit haggard from their rough trip to the farm, but not too bad considering.


Mike and his 2 person crew planted just under 5000 plants this morning.  I'll try to get some pictures of the progress put up in the next 2 or 3 days.
Posted by Diane Hiener at 9:18 PM No comments:

The babies (chickens and plants) are growing up

Once again the farm is off to a slow start.  Last year it was the never ending rain.  This year it is the lack of rain.  And to think we were so hopeful that things would be ahead of schedule with the early warm up this spring.  We did have some fits and spurts of activity until the soil dried out and became like concrete.  Yep, had some early radishes and oh gosh I forgot what else, that was planted and it all died in concreted earth.   That's farming.  Easy come, easy go.  Truth be told we have had some family health issues too that caused some delays here and there, but family is way more important than trying to get things planted on a schedule.  Things will get planted when they get planted and not before.


So now for the updates that should have happened long long ago.......


The first batch of meat chicks arrived safe and sound in May.  Once again I forgot that I really need to be placing my order with the hatchery in February to get the shipping date I want and so by waiting until late March, I ended up getting the chicks in late May instead of early May.


The pen was prepared for arrival: 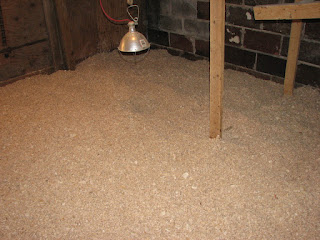 The chicks arrived safe and sound via the US Postal Service. 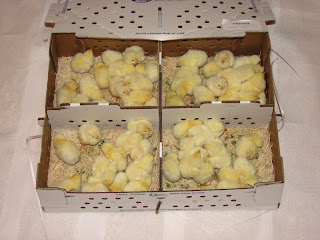 And were placed into their new home and proceeded to look entirely too cute. 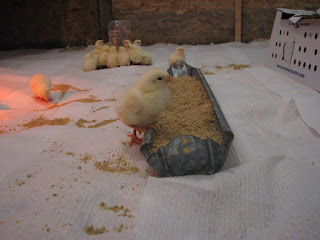 And then three weeks later grew up and became miniature chickens. 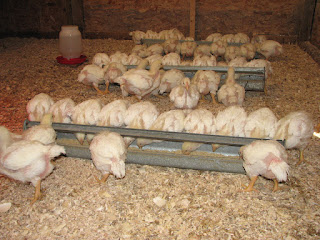 They will be 4 weeks old tomorrow and I will be moving them to their next home out on pasture.


On the vegetable side of things, Mike has been his usual busy beaver self.  This year he did some experimenting with planting early sweet corn under plastic.  The way it works is that seeds are planted and then a thin sheet of clear plastic is laid over the seeds.  The plastic keeps the soil underneath much warmer than the surrounding soil.  That means in the cool spring temps, the seeds germinate better and grow better.  When the little corn plants reach the plastic, the plastic layer is split open and the corn is allowed to grow normally.  Mike said there was quite the learning curve during the planting process as the clear plastic he was using was about as thin as saran wrap and kept tearing or bunching up.  And I have to double check with Mike, but most of the plastic mulch he is using this year is made out of that corn starch material and is biodegradable.  I'm pretty sure this stuff used on the corn is the same.  In the end though, the whole process seemed to work good and we have a nice stand of sweet corn coming along way earlier than we have ever had sweet corn this tall before.


Here are the plants right after the plastic was split on May 22nd. 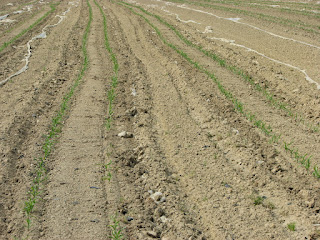 Then a little over 2 weeks later on June 7th. 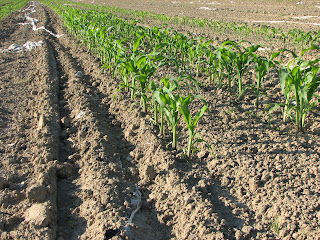 Then today, 10 days later.  (Someone {me} needed to being paying better attention while they were taking the picture and should have went and stomped that weed in the road between the rows of corn) 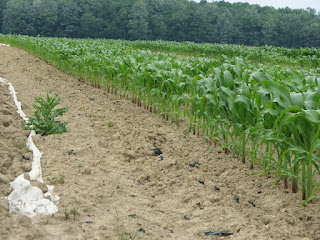 And so we have sweet corn that is looking quite good in spite of the lack of rainfall and is well over knee high.


And last but not least, we have the flats of plants.  As usual Mike's mom who lives in southern Ohio started some plants very early in her green house - mostly tomatoes and broccoli I think.   Those plants came to live on one of hay wagons in late May.  And then they sat there waiting for some rain to fall and the concreted soil to soften. 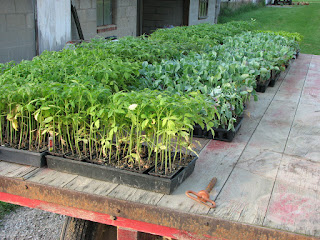 We had a few nights in late May when we were holding our breath due to forecasted morning frost, but they plants managed to pull through unscathed.  And so the combination of dry soil and family issues made planting take a back seat.  Before we knew it, the flats of plants that get started by our neighbor the next road over had to come and live at our place instead of hers.  Lots more flats joined the southern Ohio started plants on the hay wagon and on the ground by the hay wagon. 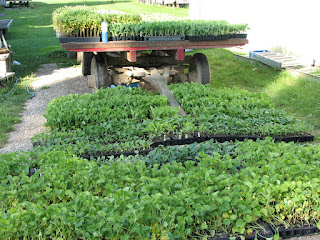 And on the ground out behind the garage. 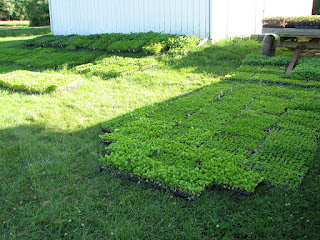 And on the ground by the old milk house. 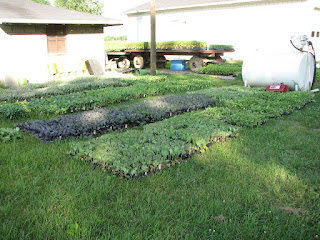 There has been progress though this past week.  We have hired some of the Amish kids that live a mile down the road from us and between them and Mike, they have made a huge dent on the piles of flats sitting around.  All the melons are planted.  All the tomatoes are planted. And quite a few others as well.  If we are not halfway planted yet, we are getting close.  Now there are quite a few baby plants hanging out in the field waiting eagerly for some rain. 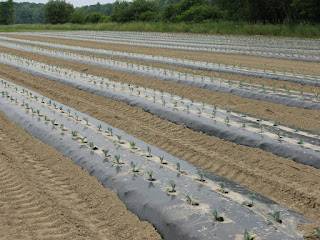 As I am typing, some rain is spitting from the sky.  Enough to moisten, but we could use a little more to soak in.  Darn farmers anyway.  Never satisfied.  Too little rain.  Too much rain.  Ha!  I keep putting my order in for 1 inch of rain per week falling on early Monday morning from midnight to 5am, but my order must keep getting lost.  The growing season will go on though.
Posted by Diane Hiener at 9:05 PM No comments: