One of the best parts of living on a farm is being exquistely immersed in the changing seasons.  When I lived in the city, I never paid much attention to the outdoors especially in cold wet weather except when a weekend outing would take me to the woods.  During the week if it were rainy or cold, the outdoors was a place to dash through from my car to the classroom or from work to the car and then back into the house.  But now here on the farm, I am outside much more often.  Even though in the coldest months the chickens live in the shelter of the barn, I am still outside carrying water and feed between buildings and hauling manure to the compost pile as needed.  Being outdoors every single day I get to see the seasons change day by day.  At times the changes are nearly imperceptible, but then there is March. This year it seems as though winter does not want to leave but as the days get longer and longer, there is no choice in the matter.  Winter ends as spring arrives.  Because each year is just a little different than the last, I thought I would go through  this year's transition.  We are probably a good week behind last year and several weeks behind 2012 the year of the early spring and summer drought.

So here goes the chronicle of winter to spring 2015:

Looking back through my pictures, I must have sensed a change was coming because on March 8th I took a picture of Peters Creek from the vantage of the culvert that runs underneath the tractor road that goes to the field.  A thin strip of open water can be seen where there once was only snow.  At this point we still had about 2 feet of snow on the ground. 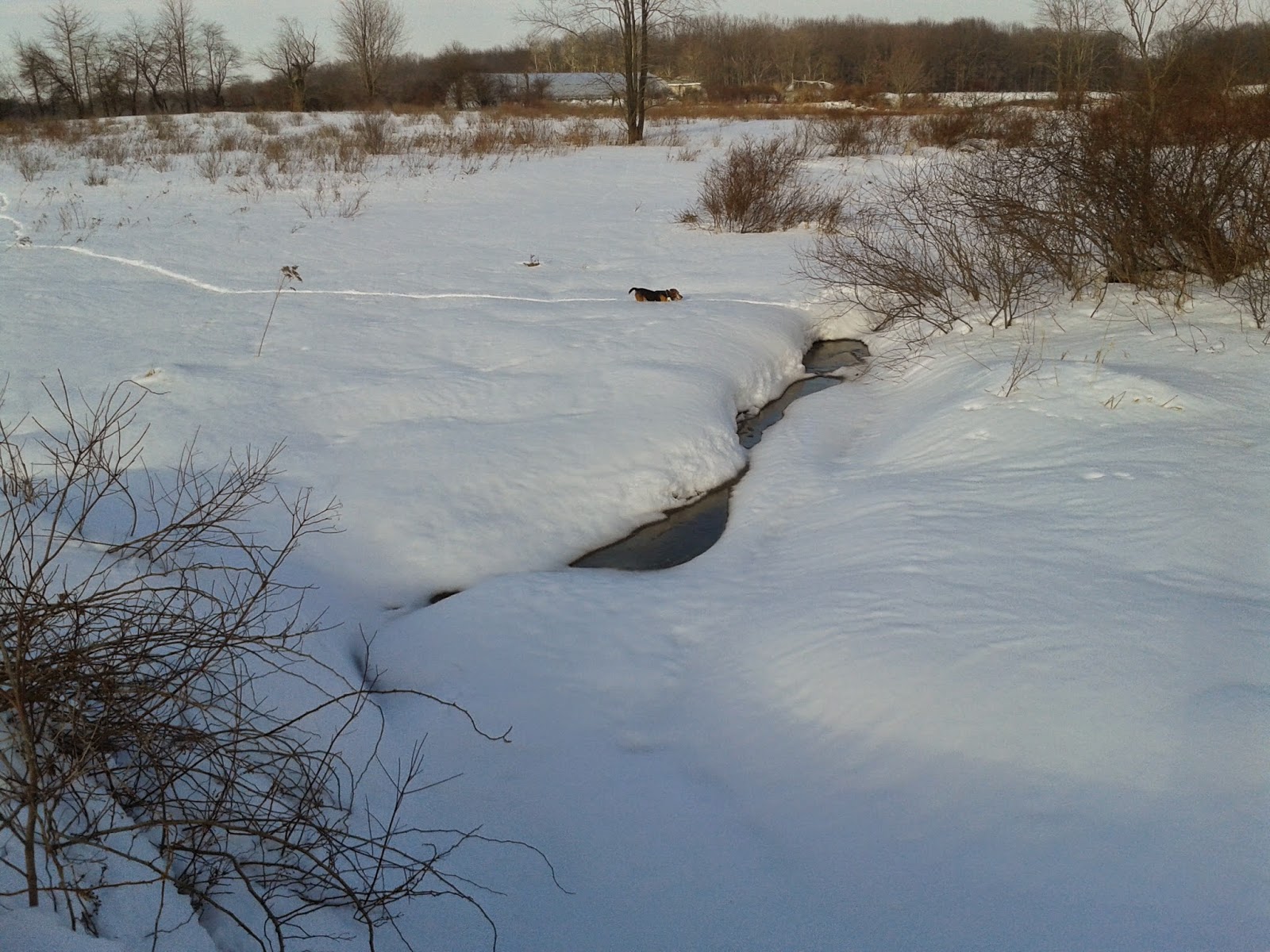 On March 9th, the sun was shining and a small bit of grass started showing on the path I walked every day from the driveway to the barns. 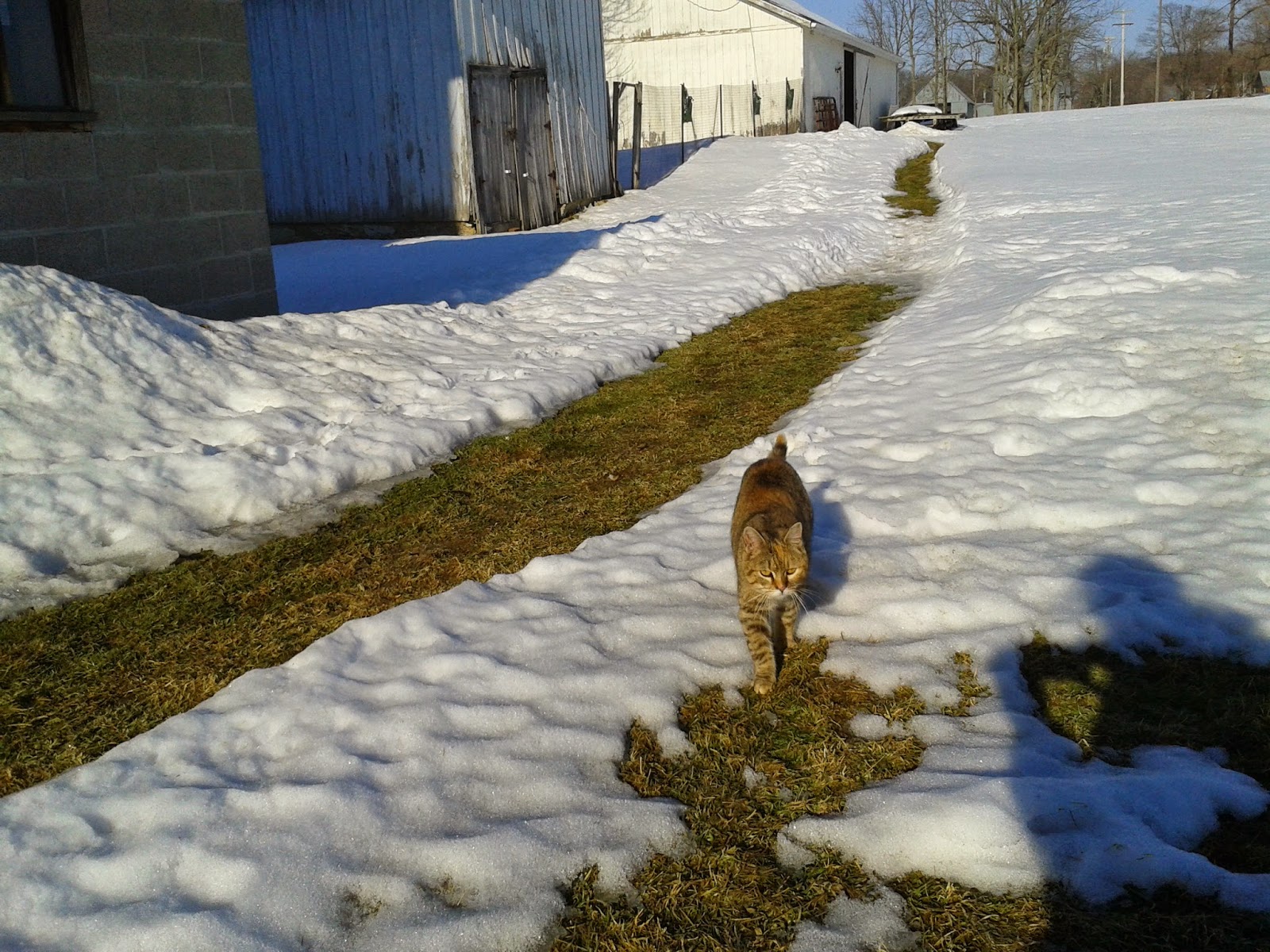 The opening to Peters Creek was a little wider. 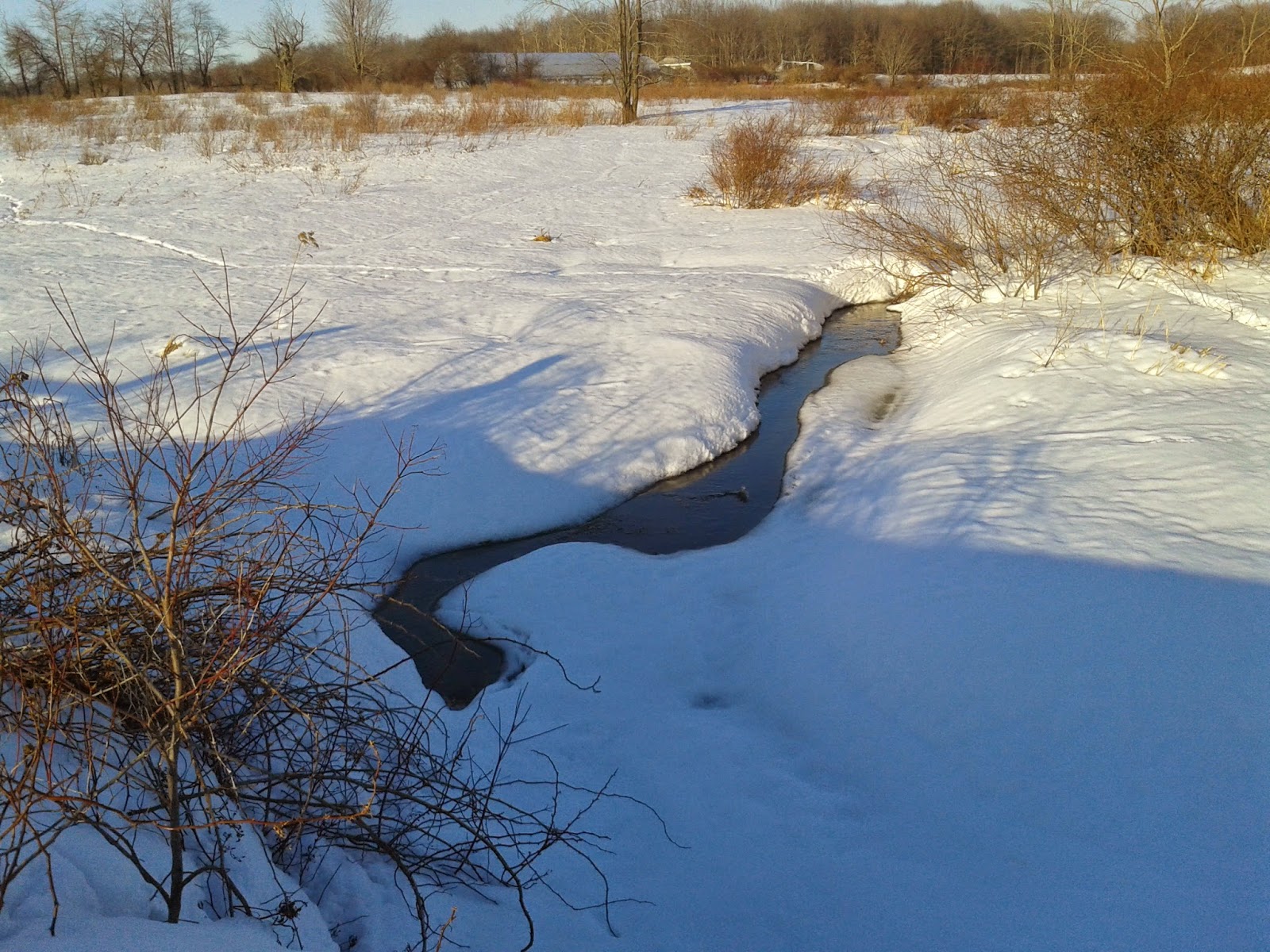 By March 11th, the sun was working as hard as it could against the reflective powers of the snow.  Peters Creek opens up a bit more.  On March 12th, the redwing blackbirds returned to the farm. 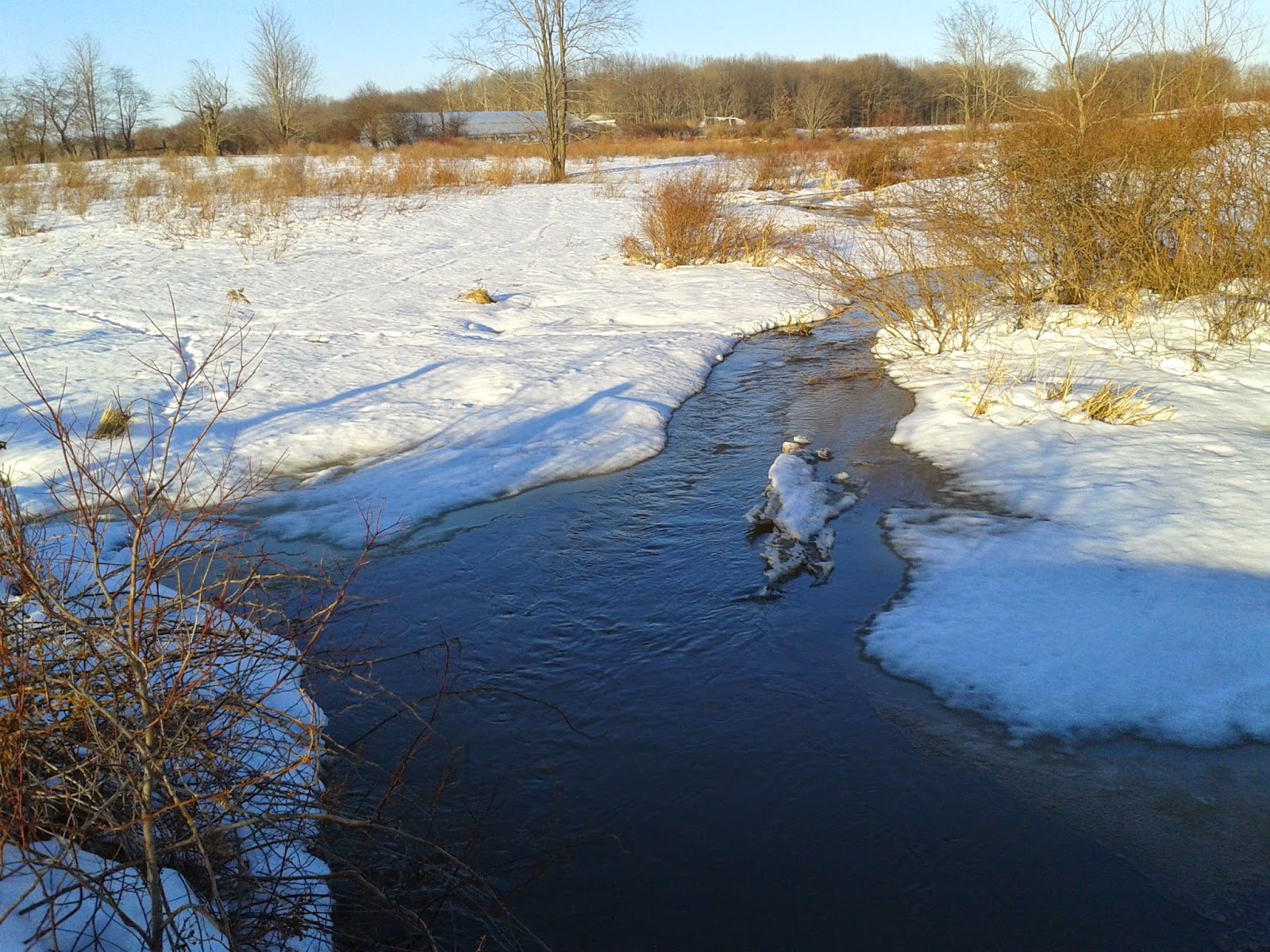 Three days later on March 14th, the snow melt was happening more quickly now.  We were fortunate to have no torrential rain to add to the snow melt.  The snow melt was enough to make Peters Creek spill out of its banks and flood the bottom land.  Although this picture is taken from the exact same spot as all the others, it almost doesn't look like the same creek. 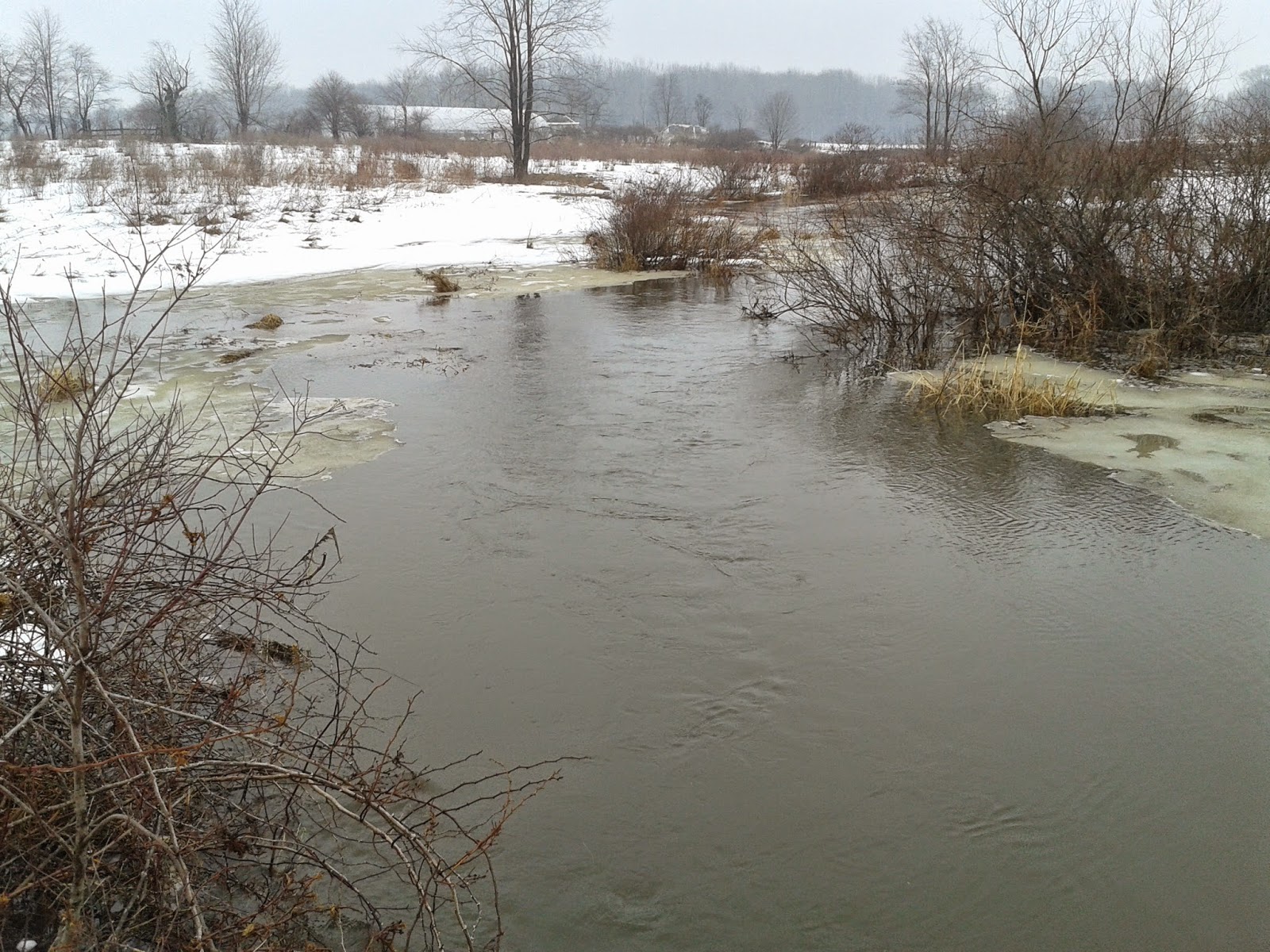 Also on March 14th, there were large enough patches of grass showing up in the yard that the chickens actually wanted to venture out of the barn.  They spent a little over 2 months straight locked up in the barn this winter thanks to a persistent ground cover of snow up over their heads. 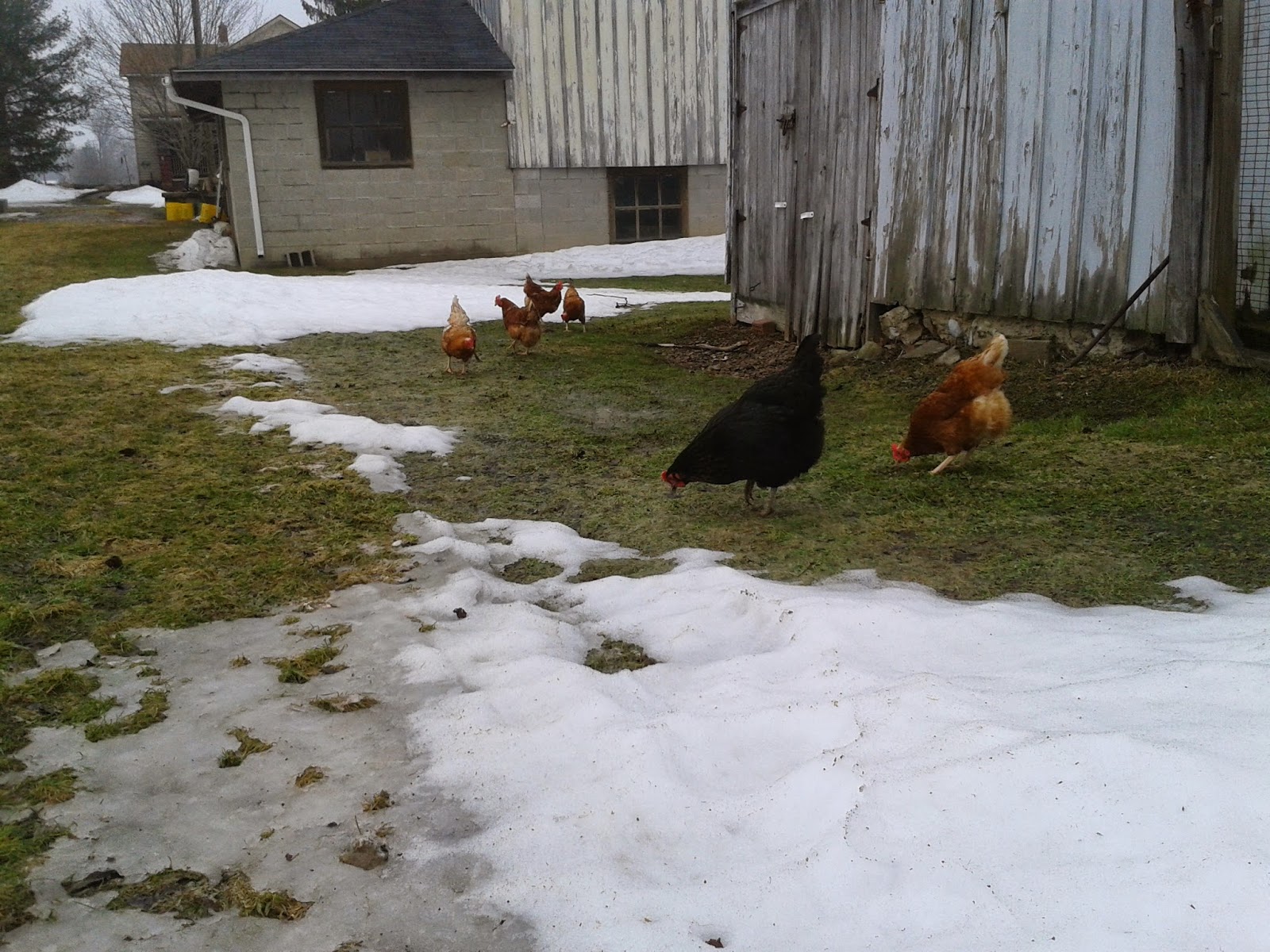 By March 21st, the farm pond was still frozen solid, but I found the first evidence that groundhogs were waking up from their winter slumber underground. The wild turkeys started to leave their wintering grounds across the road and showed up on the farm.  Right on cue, the turkey vultures returned on March 22nd.  Although they did not stop this year, I heard the swans pass by after dark on March 22nd. 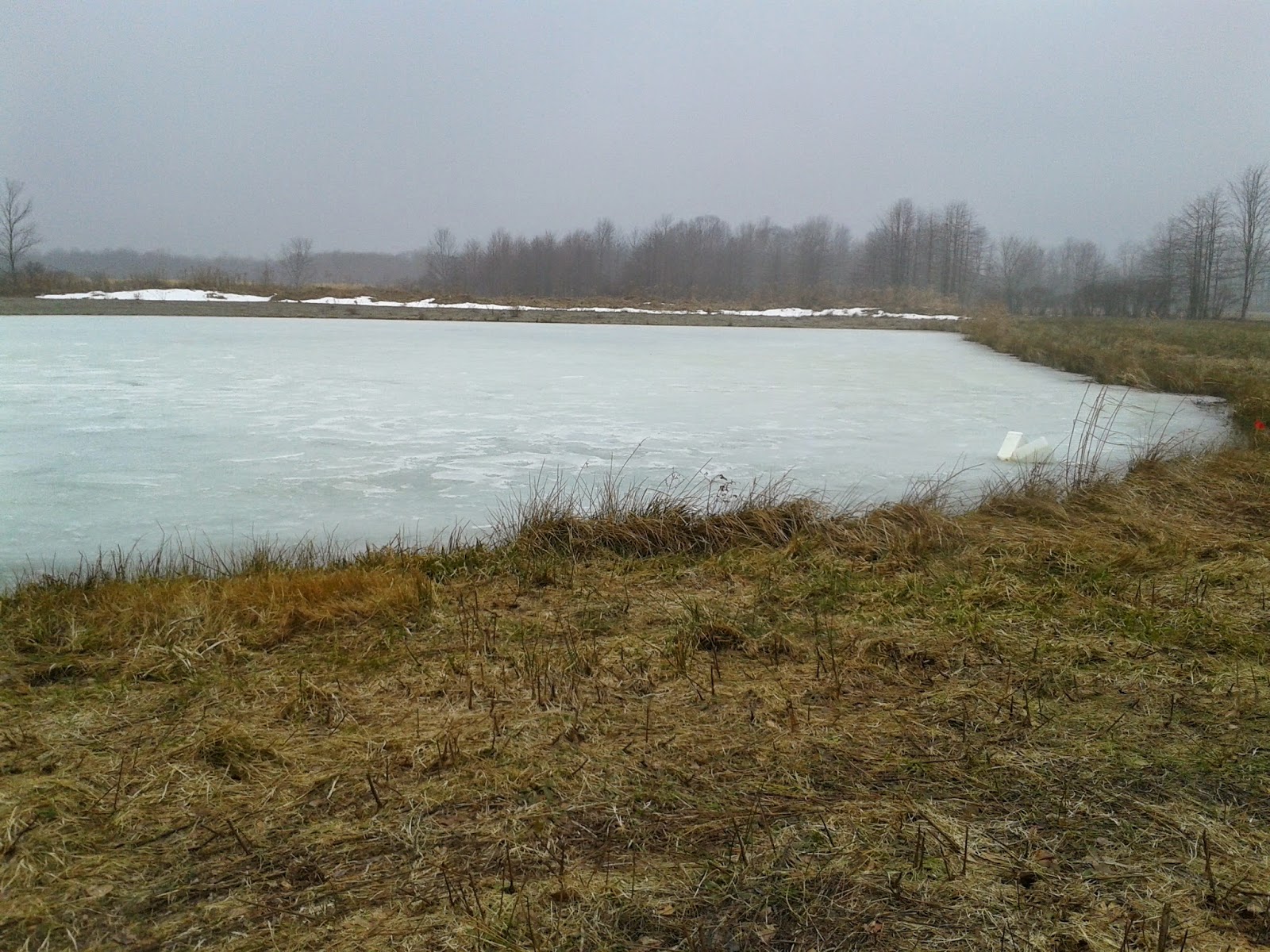 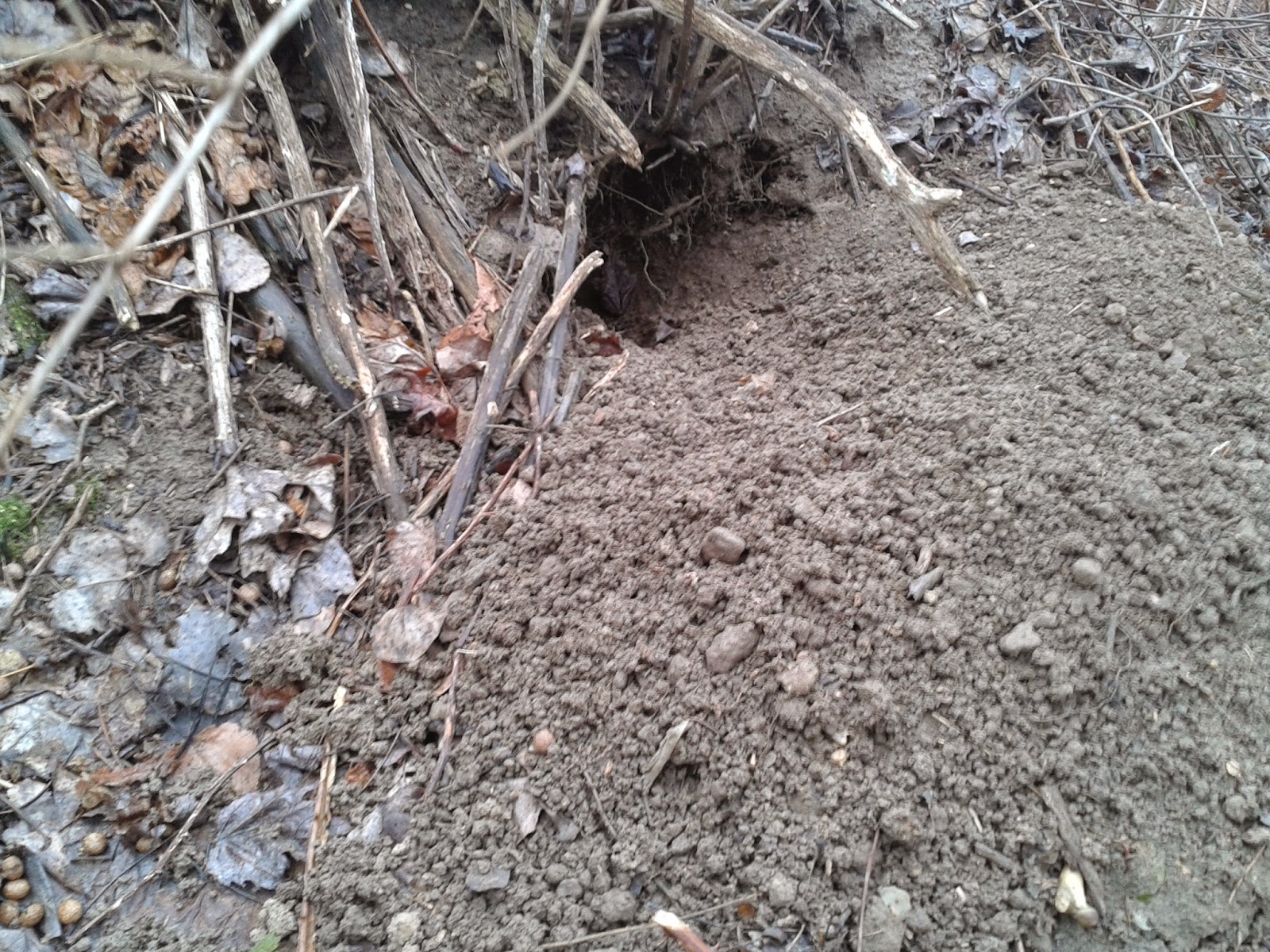 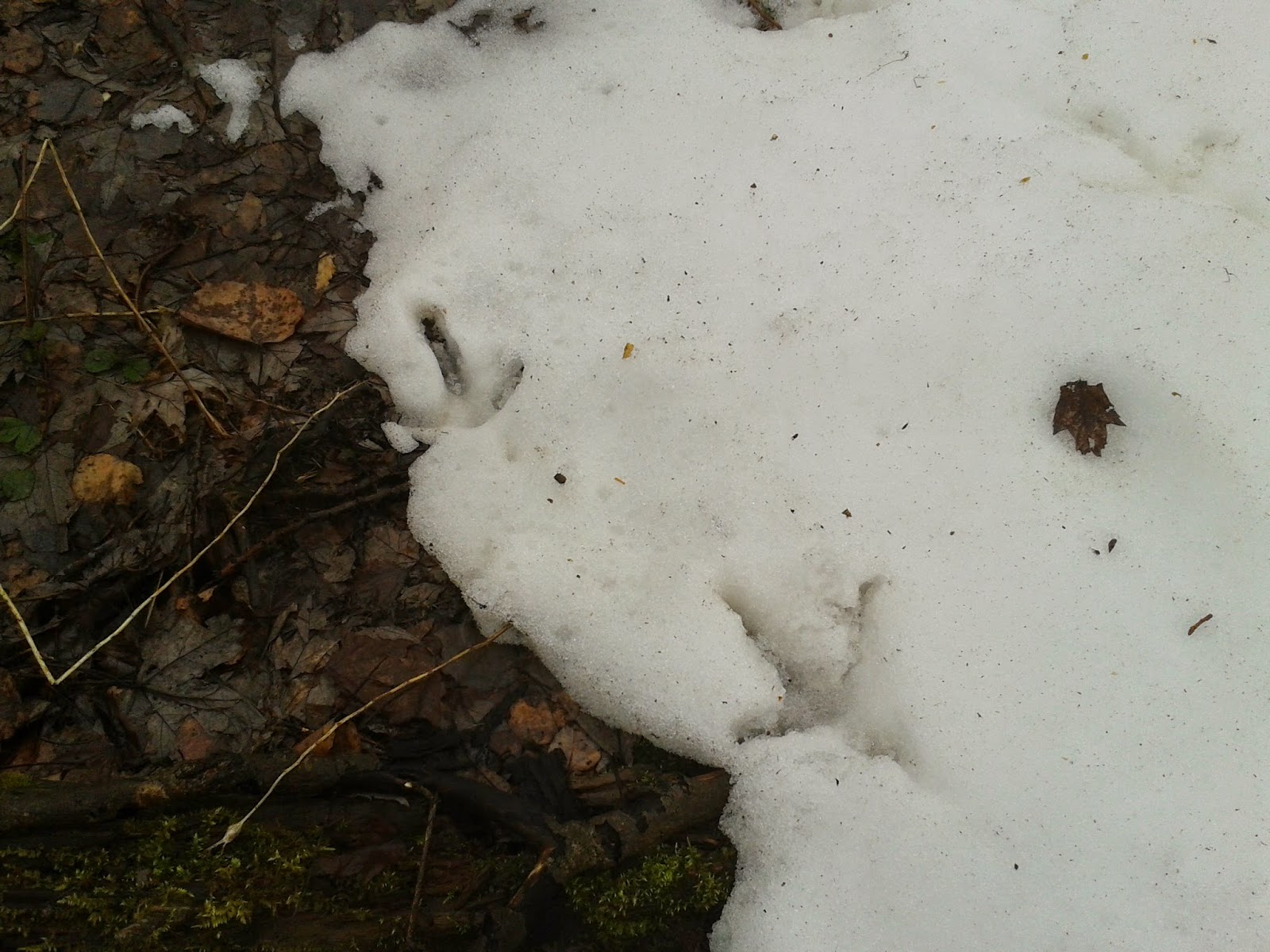 On March 29th I heard the first woodcock singing its "peent" call in the pasture and on March 30th, the farm pond, although still covered in ice, had a rim of open water along its edge.  Last year the pond was completely ice free on this date. 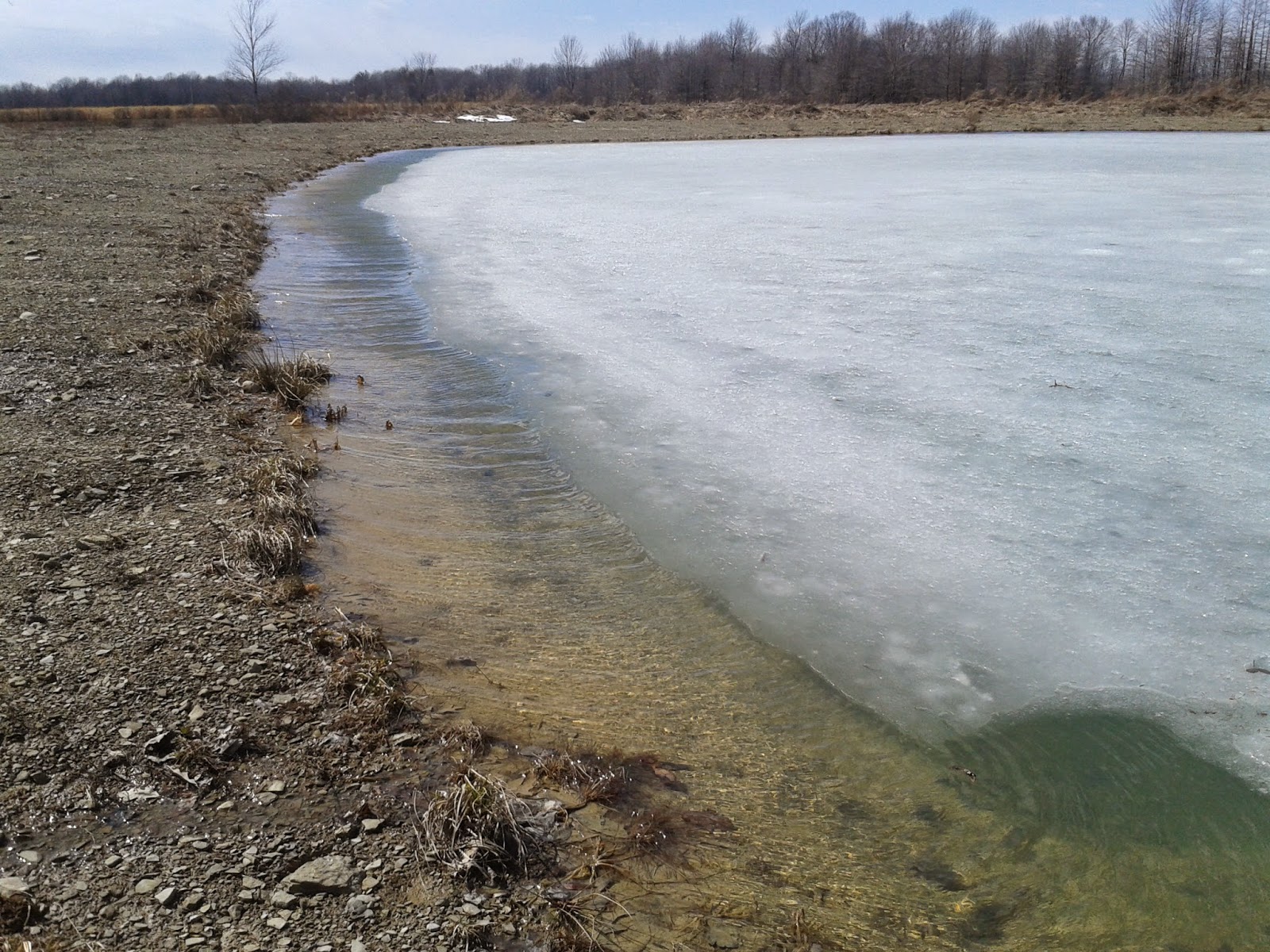 On April 1st, the wild honey bee hives that live in the old chicken coop became active.  It was nice to know that both hives survived the winter.  Official "ice out" of the farm pond came on April 2nd.  That same day I heard the chorus frogs for the first time and on April 3rd they were joined by spring peepers. 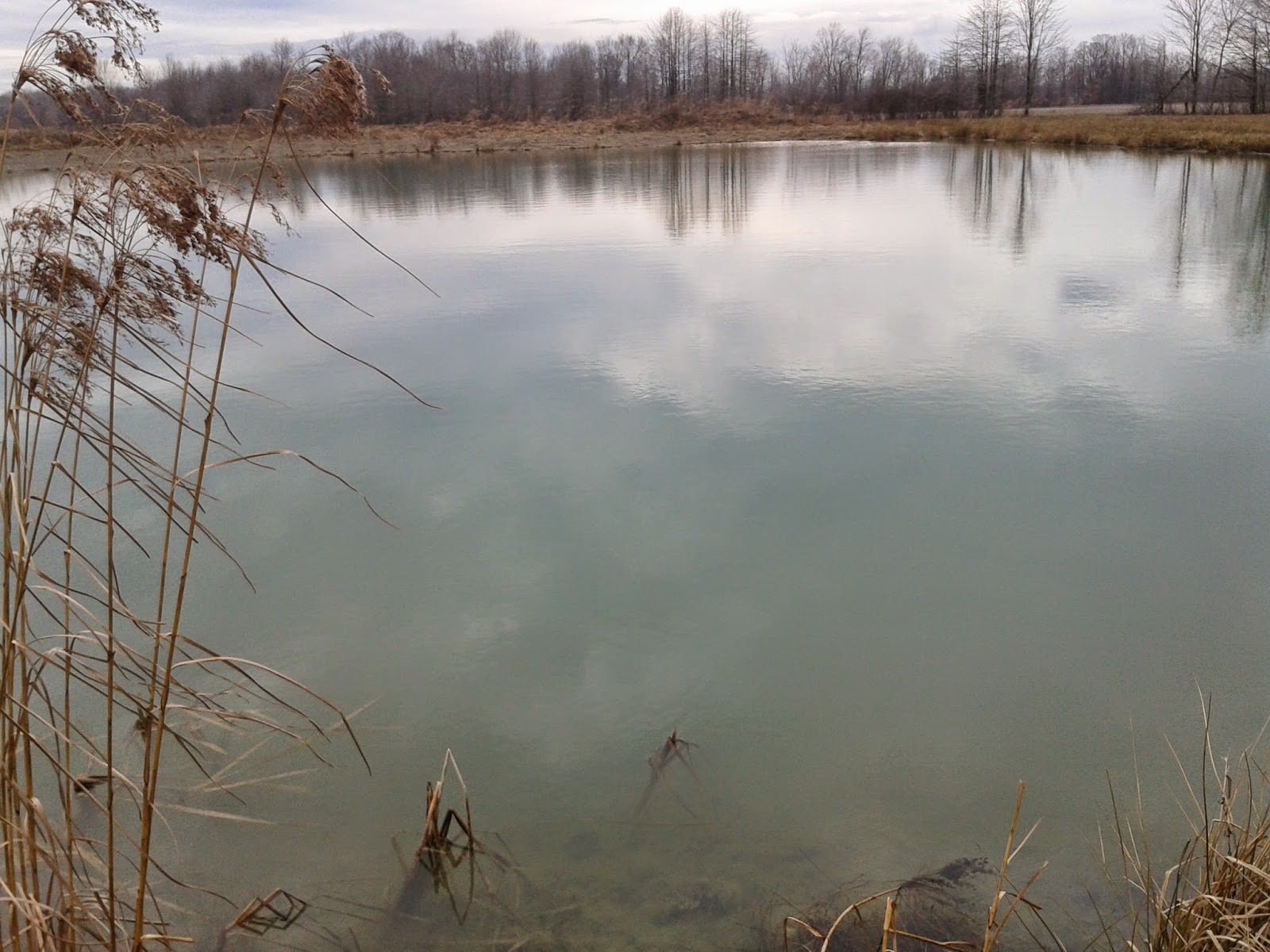 The extreme cold of this past winter has made me hoping for an early spring but nature as always doesn't care what I want.  Even so, try as it might, winter cannot hold us in her grip forever.  The transition is underway.

Posted by Diane Hiener at 2:20 PM No comments:

February 2015: One for the record books

The results are in and it's official.  February 2015 just set the record for the coldest February ever in these parts and the second coldest month ever.  The coldest month on record was January of 1977.  So in honor of a record setting month, I figured a little documentation was in order.

We were cruising along through January with a little snow here and a little snow there.  It was cold but not unbearably cold.  By February 1st the base layer of snow was around 6-8".  Not too bad.  Then the first week of February we had a foot of snow on a day when 2" of  snow was predicted.  Then three days later we had another foot of snow.  The first foot of snow looked like this: 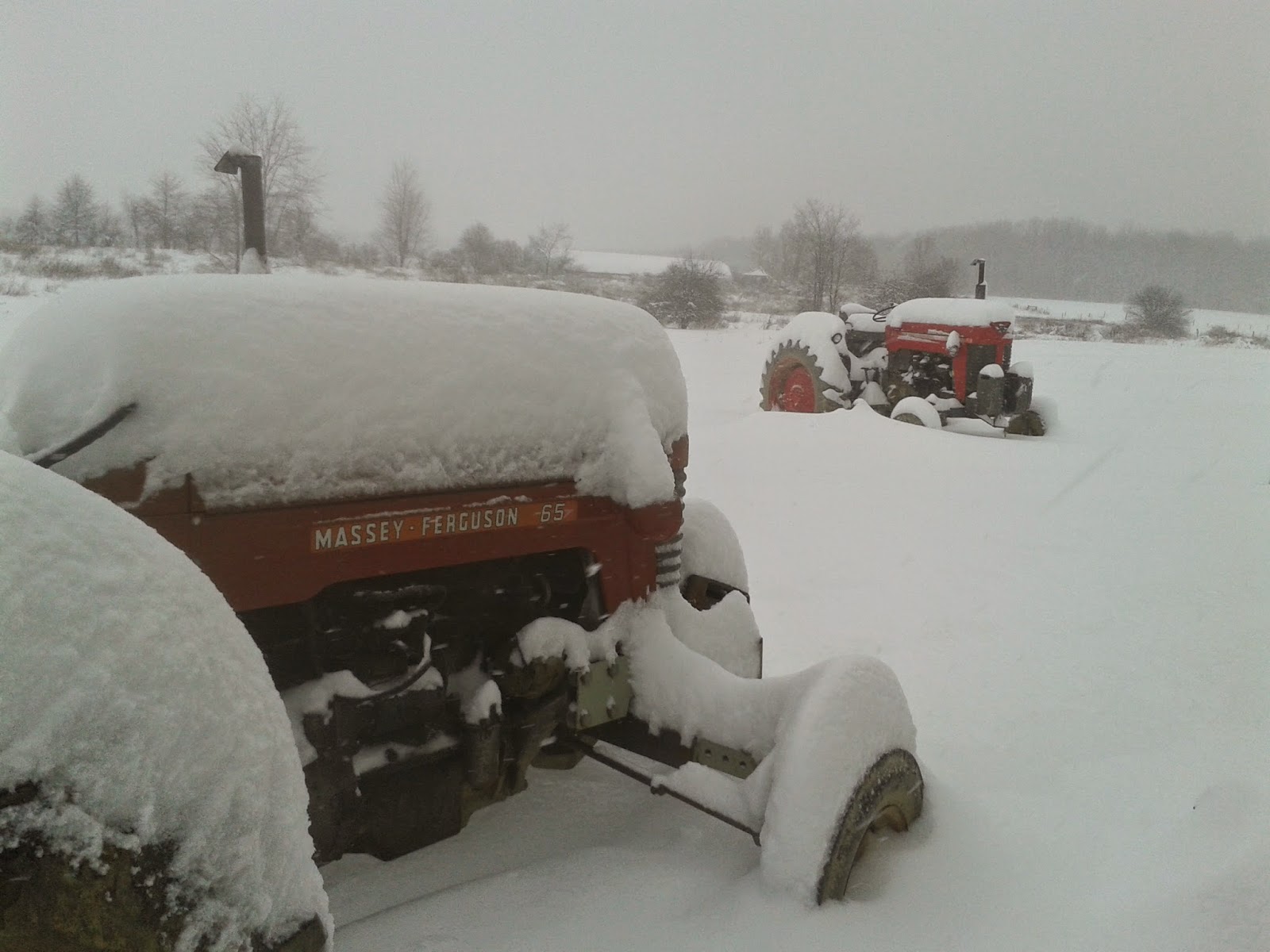 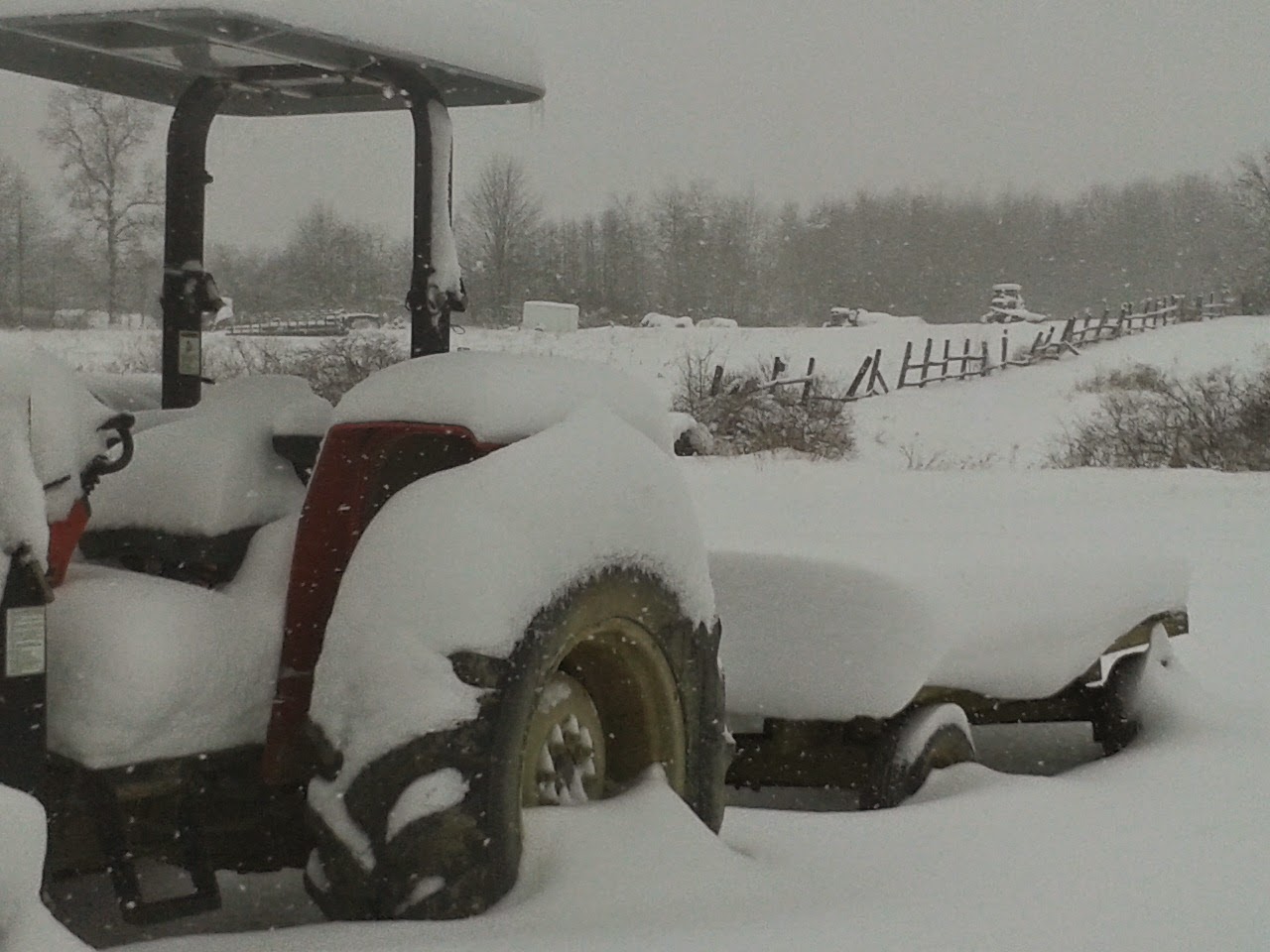 A few days after the second foot of snow I turned the beagles loose in the pasture to get some exercise while I did barn chores.  That one small act turned into a bit of an adventure.  The dogs ended up finding rabbit tracks back by the high tunnel.  Of course they wouldn't come when I called them so off I went to round them up.  I was also concerned about the weight of all the snow on the high tunnel roof so I grabbed a push broom from the barn.  I figured if I was going to trudge all the way back to the high tunnel to get the dogs, I might as well be useful and knock some of the snow off the roof.  Trudge does not begin to describe what happened next.  Figuring the creek would be mostly frozen over, I decided to take the direct route to the high tunnel.  That meant crossing through the creek bottom land which I discovered acts as a big bowl when it snows.  The knee deep snow in the pasture behind the barn was bad enough.  The creek bottom crossing turned into wading through crotch deep snow.  I suddenly realized how people who get trapped in a snowstorm in the wilderness become exhausted and die.  But since I had a job to do, I kept going.  By the time I got to the high tunnel, my legs were jelly and I was sweating profusely.  Looking on the bright side, it's always nice to find a way to burn a lot of calories in the winter.

After spending some time knocking the snow off the high tunnel roof and turning my arms into the same jelly-like condition as my legs, I thought I would take a break by getting a picture of the produce field in winter.  Since the Brussels sprouts were about the only thing tall enough to be sticking out of the snow, that's where I set my sights.  Halfway there I had to cross over a large rutted wet spot at the edge of the field.  Of course it all just looked like flat snow, but when I stepped into the wet spot, I was reminded how well snow insulates the ground.  Instantly I sank through the snow and down into a deep rut and ended up with my boot stuck in the half frozen mud and standing crotch deep in the snow once again.  OK that was not going to work.  I got my foot extracted from the mud and used an old physics trick to get to the Brussels sprouts.  I distributed my weight over a larger surface area so that I would not sink through the snow.  This is the principle behind snowshoes of which I had none.  Instead I crawled the rest of the way on my hands and knees.  Success!  The produce field in winter. 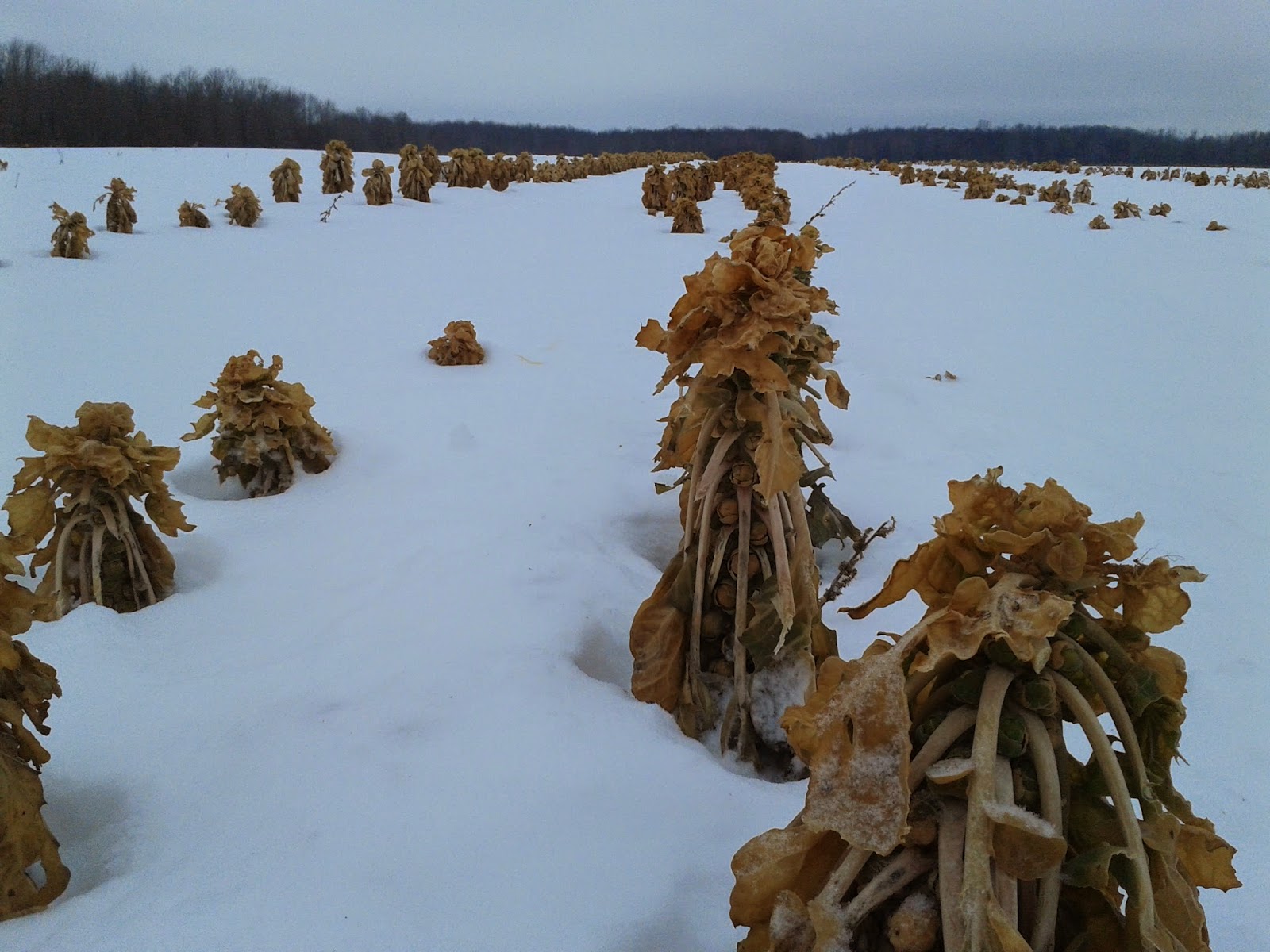 The fact that I am typing this shows that I successfully managed to make it back to the house.  But that little adventure was worth several pieces of peach cobbler.

Then Mother Nature looked out across the land and said "I have given you lots of snow.  What can I give you next?".  She gave us cold.

The first egg from our pullets decided to show up during this time.  Every year I anticipate that first egg.  Well this first egg was laid early in the morning several hours before I got out to the barn.  When egg meets cold, it freezes and cracks and ends up in the trash.  Still it is a picture worthy event. 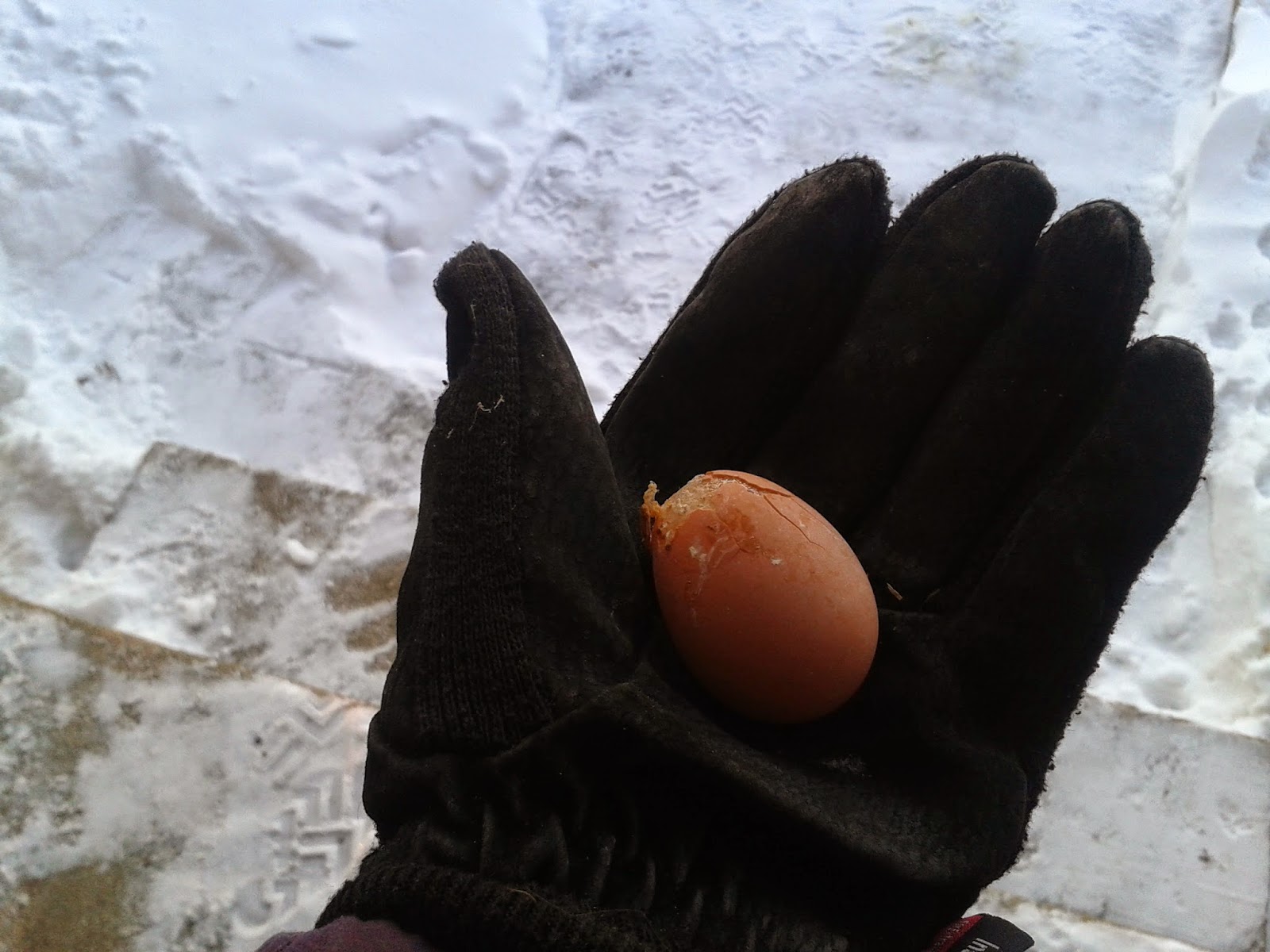 Oh yes the cold.  There was February 16th: 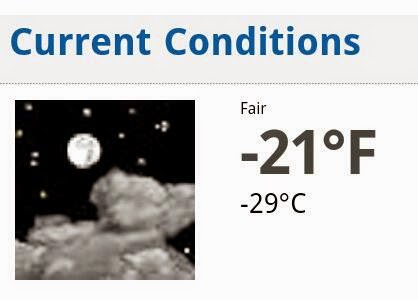 And just to add a little flare to an already cold winter, we had February 20th:

After February 20th, all the lows temperatures below zero became pretty mundane but we had several more lows in the minus single digits and minus teens.  Ho hum.  How boring.

We made it through with frozen pipes (thankful for no busted pipes) and lots of calories burnt due to a broken snow blower.  Time will tell what this will mean to the farm.  Our biggest concern is the blueberries which is the only fruit we raise commercially.  Last year's cold winter damaged our peach trees, apples trees and blackberries and we had no fruit on any of those, but the blueberries were fine.  I feel very bad for the local fruit growers and I'm not sure how this will impact the grape growers that had severe losses after last winter.  Our other concern is our pond which is small.  Last winter some of the small farm ponds in our county experienced 100% fish kill.  We just stocked our pond last spring.

All of this is just life on the farm though.  Last night was a beautiful sunset on the farm.  Time to start looking forward toward spring. 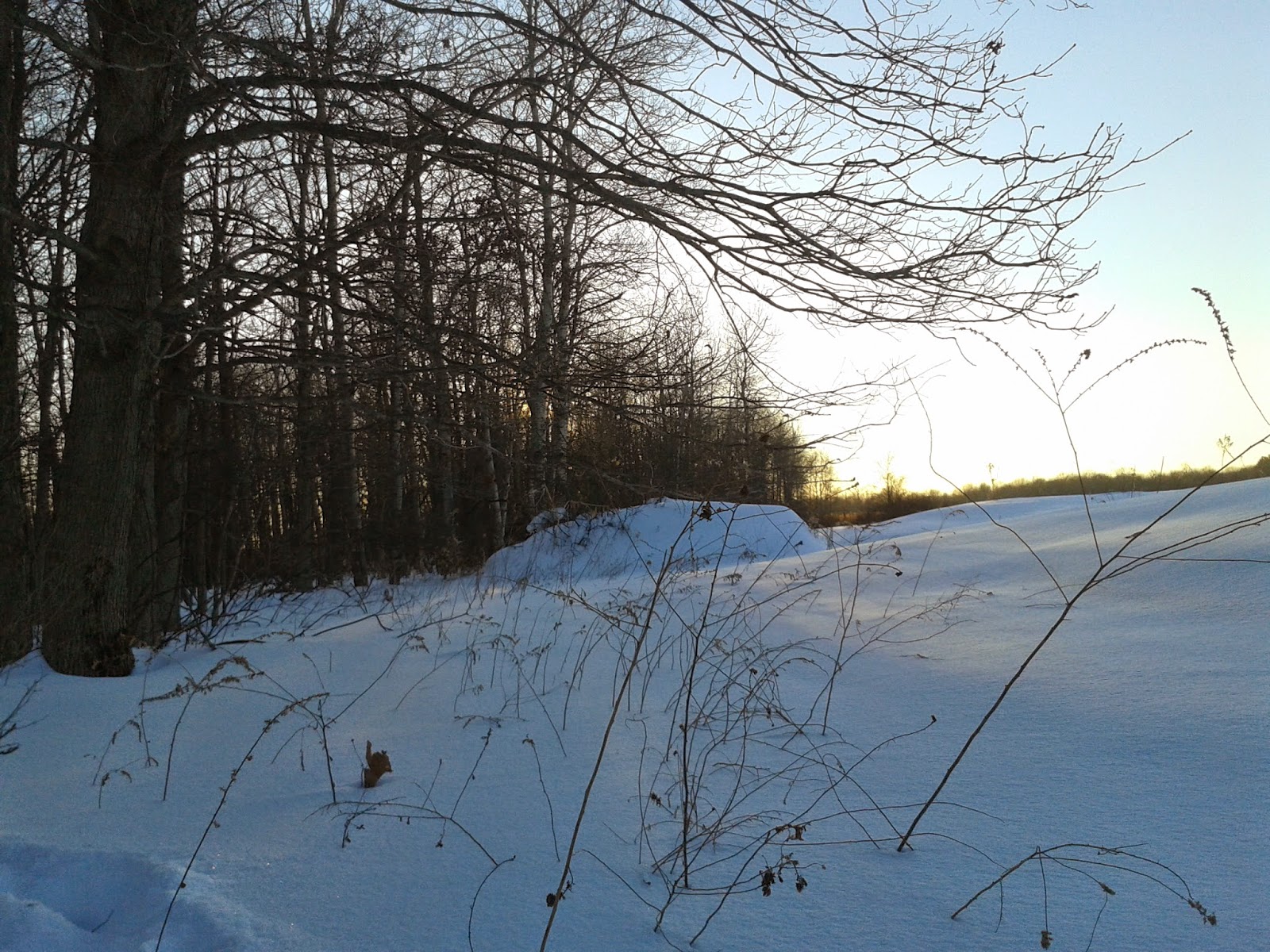 Posted by Diane Hiener at 5:03 PM No comments: