I've been waiting.  December was so warm and un-snowy that I was sure winter would hit with a fury in January.  When January turned out to be as warm and generally snow free as December, I was sure we would be buried in snow in February.  February came and went with mild temperatures and once again, very little snow.  Surely March would be colder than normal to balance out the unusually warm winter.  While I won't be surprised if we get hit with a spring snow storm, there is no such weather in sight.  We just finished up an entire week of high temps in the 60's and 70's.  The week long forecast is for more the same with a couple days forecast to have highs in the 80's.  Our normal high for March 18th?  47 DEGREES! 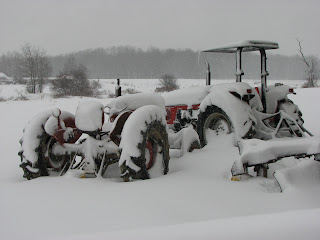 This was our pasture last year (2011) on March 11th.  We haven't had anything that looked remotely like this since back in January.
February 2, 2012 was a warm and sunny day.  I am thinking that the groundhog that saw its shadow wasn't predicting 6 more weeks of winter as much as he just wanted to go back to bed for awhile. 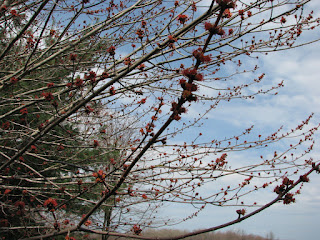 And so now here we are with a spring that is progressing at warp speed.  Today I snapped this picture of the maple tree in the side yard with its buds bursting open.  I was pretty sure I remembered taking a picture of the budding maple tree last year so I looked back through the blog.  Sure enough, I took a similar picture, with buds not nearly as open as today, on April 10, 2011.  The picture is in last year's blog entry "Spring has sprung. Finally.". 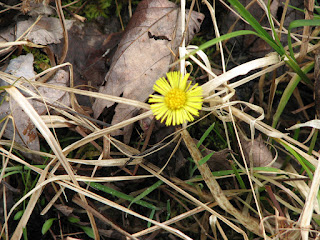 Yesterday, I took my bike out for a ride around the block and saw some yellow flowers blooming alongside the road.  I should have stopped to look because a splash of yellow color is something that is not seen around here in March very often.  As it so happened, I took the beagles for a two hour hike around the farm this morning and found some more blooming on one of the grassy openings where the farm's tile line main runs.  Coltsfoot.  The book says it can start blooming in February, but I certainly cannot recall seeing it that early before.  Truth is that most Februaries, the ground is covered in snow so that probably has something to do with it. 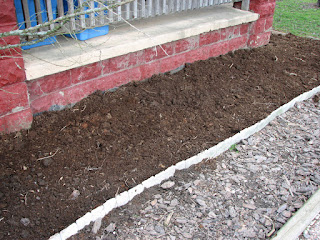 After lunch, I finally managed to do something productive.  The flower beds by the house are sorely in need of some more soil.   The composting pile of chicken manure and bedding has been building for several years.  It was a match made in heaven.  6 trips with the wheel barrow from the compost pile, out the driveway by the barn, down the road, in the driveway by the house and over to the flower bed and the front flower bed is filled.  I did feel a little silly pushing the wheel barrow down the road, but it was MUCH easier than pushing it across the soggy sponge that is called our yard.  I still need to work on the the other parts of the flower bed, but I was liking how the front porch bed looked when I was done.  I won't turn over the soil and mix it in for at least another month though.  AND I am going to have to really work at weed control this year because last year there was a bumper crop of "volunteer" tomato plants growing in the compost pile.  The chickens did a pretty good job of picking off and eating the ripe tomatoes so that hopefully reduced the re-seeding of the soil just a little bit. 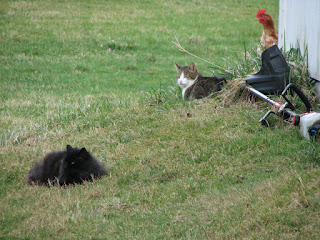 As I was finishing up some more spring yard work and afternoon chores, I was thoroughly enjoying watching the cats and chickens hanging out in the yard.  I always get a kick of the chickens when one of them sneaks up behind the cats.  The cats could care less, but the chicken always acts like it is getting away with something.
A fine March Sunday to be sure. 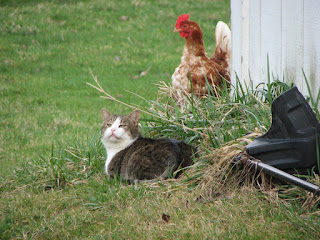 Posted by Diane Hiener at 9:50 PM No comments:

Spring seems to be rolling along at an increased pace this year.  I keep waiting for that shove back into winter.  While I am still expecting it to happen, it has not happened yet. 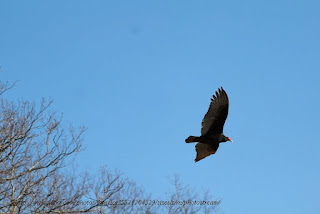 Now everyone who has lived in northeast Ohio for any amount of time is certainly familiar with Buzzard Day in Hinckley, Ohio.  Every year on March 15th, the turkey vultures return.  And it is very important to note that until the OFFICIAL BUZZARD SPOTTER sees a turkey vulture, they have not officially returned.  Our farm is a bit further north than the town of Hinckley and so most years, we don't start seeing turkey vultures flying over the farm until about a week later or around March 22nd.  However, the warm weather has this spring a little ahead of most years and this past weekend I did spy a familiar large dark colored bird flying overhead.  Of course, the official spotting of the turkey vultures has not yet occured, so it could not have been a turkey vulture that I saw.  Up until March 15th, we refer to any sightings as "those giant crows with no feathers on their heads".  After March 15th, we are free to call them turkey vultures.

Yesterday also saw a shift from indoor farm activities to outdoor farm activities.  I had a bit of a slow start on Sunday morning as a result of some Saturday night fun with girlfriends and not getting home until almost 2am Sunday morning.  The spring forward to Daylight Saving Time did not help the cause either.  But somehow I managed to drag myself from bed around 7:30am to do chores and cook up our traditional Sunday eggs and bacon breakfast.  Then back to bed for a little nap before lunch.  I LOVE laid back Sunday mornings. 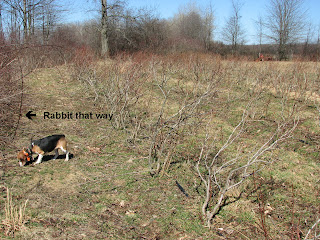 By lunchtime, the sun was out in full force and had warmed the early March air to near 60 degrees.  Time to get busy outside.  I decided a bit of multi-tasking was in order so I got the beagles ready and we walked over to a piece of woods and brush that is adjacent to our blueberry patch.  It took about 15 or 20 minutes of tromping through the woods, but I finally stepped on a downed tree top and out squirted a rabbit.  I called the dogs over and they picked up the scent and were off on the bunny trail.  The nice thing about rabbits is that they circle through their home territory.  The dogs are not very fast and the rabbit hops a long at a slow pace just fast enough to stay ahead of the dogs.  This rabbit started off by running across our meadow to the next woodlot and so I ended up taking a bit of a hike over there to make sure the dogs were not following a deer trail.  The rabbit finally circled round, re-crossed the meadow and back to home base.  After I was convinced the dogs were indeed following the rabbit, I headed over to the blueberry patch and started working. 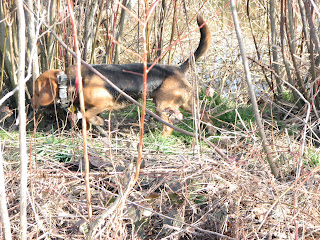 For the next 3 hours, I pruned the blueberry bushes and the beagles ran rabbits in the woodlot next to where I was working.  It was multi-tasking perfection: excersize the dogs and prune the blueberries.  At the three hour mark, the beagle sounds were getting further away then I liked so I thought it best I go find them and usher them back home.  Enough beagle fun for one day.  Even on the way back to the house, the dogs were happily running along and making sure to sniff out any weed patch for signs of another rabbit.  One interesting spring note was that while I was over in the far swampy woodlot collecting the beagles, I heard the faint sound of a spring peeper.  It was very tentative, but it was very distinctive.  More signs of spring. 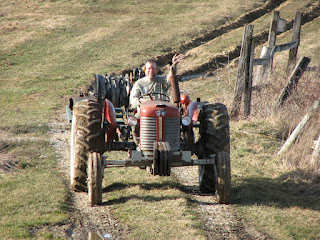 Another sign of spring was Mike riding around on his tractor.  He was heading back to the house after a test run of the plastic lifting machine out in the field. 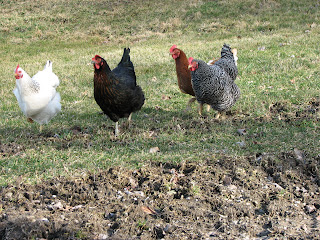 The chickens had a glorious Sunday outside.  I can't let them out of their pen much before noon because they will lay eggs all over the place.  On weekdays when I am at work, Mike will usually let them out in the afternoon or if Mike is not home either, I will let them out for an hour or two when I get home from work.  But yesterday they got to spend a good 6 hours out and about searching for bugs and such.  The four pet hens were there to greet me and the dogs when we got back to the house. 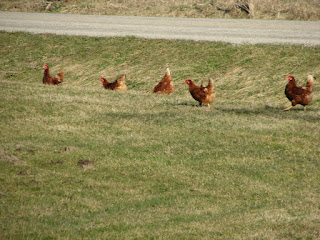 Meanwhile, the laying hens that work for a living were mostly concentrated in the ditch that runs along the road.  The ditch is a wonderful spot to find all sorts of worms and bugs.  The girls seemed to be pretty well behaved yesterday too and I did not see any of them out on the road.  In all the years I have raised chickens, I have never had a group of chickens want to venture on to the road as much as these girls have.  Not that they head to the road that often, but it certainly they head there more than any other flock I have raised. 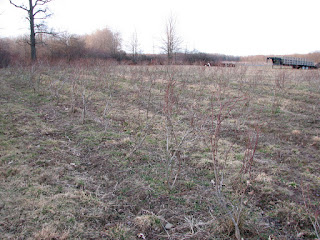 After deposting the dogs inside the house and helping Mike move some rolls of plastic from his truck into the garage, I headed back to the blueberry bushes for 2 more hours and finished the job.  We have somewhere around 120-130 blueberry bushes in five rows.  With last year's incredibly rainy spring, I did not get the bushes pruned so this year I had quite a bit of work to do to make them look tidy.  The evening lighting was very flat and it is hard to see the bushes in this picture, but they looked mighty purdy when I was done.

As I was finishing up around 7pm, I heard the familiar sound of a snipe winnowing in the pasture.  Yes there really is such a thing as a snipe.  Look it up if you don't believe me.   Better yet follow this link and you can read about and listen to what a winnowing snipe sounds like. Other than spring peepers, the sound of the snipes doing their mating "dance" is one that I most associate with spring.  It definitely brought a smile to my face as I walked home after a good afternoon's work in the field.
Posted by Diane Hiener at 6:00 PM No comments: