How summer squash saved the poultry 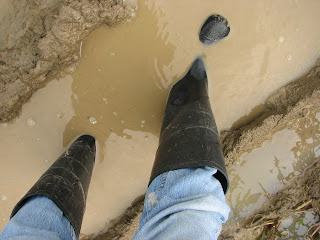 I really don't know quite how to classify this growing season other than horrible.  But horrible is kind of vague.  Usually I can pinpoint the downside of a particular growing season by saying things like "too cold" or "too wet".  This year it has fluctuated back and forth so much each month that it is kind of hard to keep track.  Of course the spring started out way too wet.  Planting across all of the Midwest was well behind normal.  Then once we got everything planted, the weather turned hot and dry.  We basically had no rain to speak of for about 5 or 6 weeks.  The plants that were on plastic lived, but their growth was stunted.  Seeds that were planted died in the ground.  Whole plots had to be plowed up and planted over.  Then it started to rain and it pretty much has not stopped.  Mike cannot get into the garden to cultivate the later growing crops.  Weeds are taking over.  Picking vegetables that are ready has become a major physical task as the mud and water is so deep that every step threatens to suck the boots off your feet.  Mike has resorted many times to picking in his bare feet. 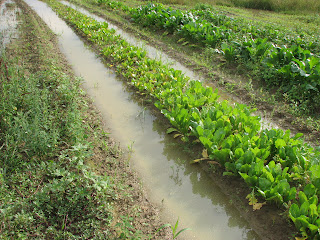 Some of the later plantings like beans are looking really good, but if the rain does not stop soon, the plants will be drowned out.  This picture is the end of a row of turnip greens.  Some of the rows look good, but this end is being drowned out.  Always a challenge. 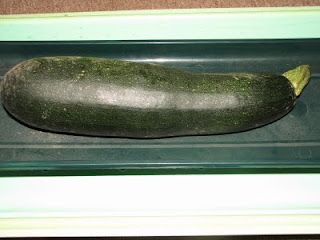 And that brings to me to how the summer squash has saved the day for the meat chickens and turkeys.  Managing pastured raised poultry is manageable in dry spells, but becomes a major effort in wet spells.  The meat birds arrive on the farm at one day old and are kept in a pen in the barn under a heat lamp until they have enough feathers that they don't need any supplemental heat and then they are moved to pasture.  I usually try to move them outside between 3 to 4 weeks old.  The exact day depends on the weather.  I prefer to move them outside when there is a forecast of at least a day or two of benign weather.  It's stressful enough moving them that I don't like to add in thunderstorms or cold wet rain into the mix.  But they really need to be moved by 4 weeks of age.  After that, the chicks seem to get restless in the barn and in my early days of raising chickens, I had a few instances of cannibalism and fighting.  If I move them outside before they turn 4 weeks old, all is well and I've never had a flock start picking at each other. 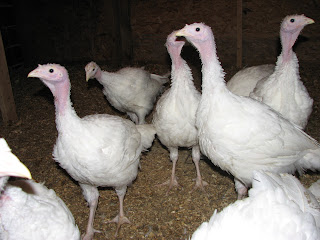 Well this year the rain started when the meat chicks turned 3 weeks old.  At 4 weeks old it was still raining.  Mike had brought up quite a bit of zucchini and yellow squash from the garden that had gotten too large.  He likes to pick the mature squash off the plant because then the plant will grow more flowers and thus more squash to sell.  I took full advantage of the bounty of large squash.  Every day I would break apart 3 or 4 jumbo summer squash and give them to the meat chicks and turkeys.  They happily devoured all the squash that was offered to them (in addition to their regular feed).  Finally at 5 weeks of age, the weather broke for a few days and I was able to move the chicks out to pasture.  The turkeys in the meantime get to stay in the barn until the meat chicks are butchered.  At 7 weeks of age, they are doing well and are still enjoying a daily treat of summer squash or zucchini. 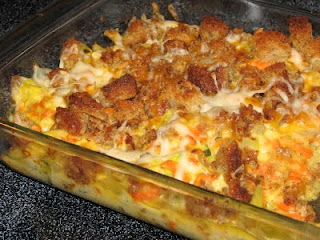 Of course zucchini is quite enjoyable for the humans on the farm too.  On this evening's stroll into the garden, I came back to the house with a couple zucchini's which along with some homemade herb bread stuffing and our own roast chicken got turned into a nice dinner casserole.

Now if the rain would only stop.  What a miserable growing season it has turned out to be.  We can only hope fall will be more kind.
Posted by Diane Hiener at 9:29 PM No comments: