I seem to be having a whole lot of trouble keeping up with the blog this summer.  I don't why my days seem much more full than last year.  Seems like most nights Mike and I are sitting down to dinner at 9 pm or later and the thought of starting a blog post at 10 pm when I have to get up at sunrise is not appealing at all.  Even today when the meat birds are all butchered and that chore is gone from the evening check list, here I sit at nearly 10 pm writing down my thoughts.  I have been finding it so helpful to be able to look back at last year though and see what the farm was doing when, so I do have to bite the bullet and "just do it" once in awhile. 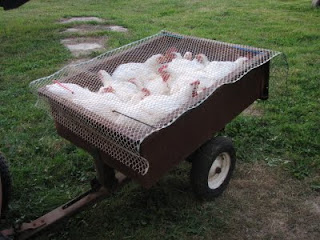 This past weekend was EXTREMELY busy for me.  We had our first of two butchering "parties" scheduled for Sunday July 17th.  I figured I owed it to my guests to clean the house if only a little.  At least it needed to "look" presentable.  So Friday evening and Saturday afternoon/evening were devoted to housework.  Of course, I still had to take care of all the animals.  Saturday morning I moved 1/2 of the meat chickens (about 25 birds) from the pasture to the barn before I went to work.  I moved the second half right around sunset Saturday evening.  I have been in the middle of a project to build a bunch of wooden chicken crates since last year.  There is so much to do that the project has been pushed way down the list.  Normally I move the chickens from pasture to barn in an old wire dog cage, but the birds were older (read BIGGER) than normal due to scheduling conflicts on our originally scheduled butchering day.  They were actually 1 day shy of 10 weeks old.  Pretty dang old for a meat chicken.  This meant that I could only move about 6 birds at a time which would mean 8 trips back and forth between barn and pasture.  Not very efficient for sure.  So I came up with an idea to turn my little red wagon into a chicken mover and was able to move 12 chickens at a time.  Two trips Saturday morning and two trips Saturday evening was much better.  I do need to work on building the crates though. 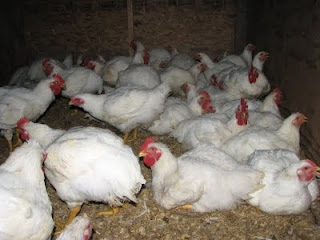 So at sunset all 49 chickens were secure in the pen in the barn.  It's the same pen I use as a brooder pen to start the baby chicks before they get moved out to pasture.  I had left all the bedding in place from when they lived there 6 weeks earlier so the pen was ready and waiting for them Saturday night. 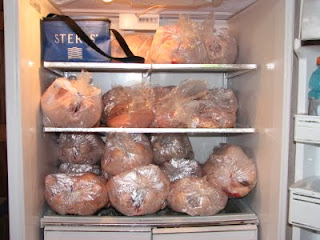 By the time I got all the butchering equipment set up, finished cleaning the house and made a batch of blueberry muffins for the crew the next morning, well, I went to bed at 1am.  Then up at 6 am to finish getting ready for everyone scheduled to arrive Sunday morning at 8am.  Sure wish I could have talked everyone into 7 am since it was going to be so hot, but seems like people like to sleep in a bit on their only weekend day off.  We really didn't get started until 8:30am, but I have to give everyone a big round of applause as we were done butchering and everything cleaned up and beer flowing at 11 am.  The fridge plus an overflow cooler were packed full of chicken. 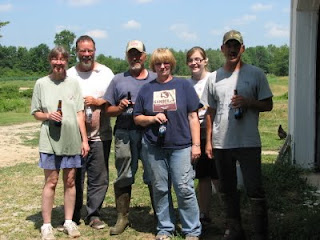 I was able to recruit one of my camera shy friends who works in the kitchen doing final prep and packaging to take a picture of the fine looking rest of the crew. 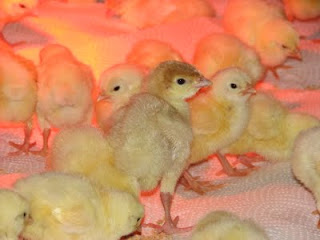 After everyone left, it was time for lunch and a well needed nap.  Then in the afternoon I had to strip down the chicken pen where the meat birds spent Saturday night in order to get ready for batch number 2 of meat birds that were arriving on Monday.  Normally I have the hatchery ship my day old chicks to me via the US Postal Service, but this batch I order some turkeys in addition to meat chicks.  They used to ship them together, but several years ago changed their policy to ship chicks and turkey poults separate.  I would need to order 15 turkeys for them to ship and I only ordered 8 so I had to go pick them up.  I spent part of Monday morning wrapping and freezing some of the butchered birds and organizing the rest. (The largest birds were nearly 9 pounds dressed weight.  Holy chicken!)  Mid-morning I drove an hour south to pick up sprout packing containers for Mike and then headed 2 hours west to pick up the turkeys and chicks.  I got home at 4:30 pm and then had to put bedding in the brooder pen, hook up the heat lamp and get the food and water ready.  Then regular evening chores and it was another night of finishing up at 9 or 10 pm.  At the end of the day though, all the chicks and turkey poults were snuggled in the brooder pen.  I will raise them together until the chicks get moved out to pasture at 3-4 weeks of age and then they will be raised separate after that.
So Sunday saw 49 chickens leave the farm and on Monday, 52 day old chicks and 8 turkey poults arrived at the farm.  Chickens going and chickens coming.
Posted by Diane Hiener at 10:15 PM No comments:

How does your garden grow July 2011 style?

Shhhhhhhhh, don't tell anyone, but the garden doesn't look like this anymore.  It looks much better!  I took several pictures on July 18th and haven't had time to put them in a blog.  I'm pretty sure that I can back date a blog posting so that no one will know it is really July 31st.  Shhhhhhhhhhhhh.


Mike has been thoroughly disgusted with how the garden has been progressing so I had to take a walk back and see how everything looked myself and folks, it's not that bad.  OK, the sweet corn situation is not that good, but everything else is coming along.  There have been two problems.  One is that everything got planted really late.  We had this problem last year too and I had to pull up the pictures from July 2010 blog to show Mike that the garden looks pretty similar this year compared to last year and last year turned out good.  Second is that since planting time we have had very little rain.  Very little means that in the last 2 or 3 weeks we have had only 0.1 inch of rain twice.  Throw on top of that temps in the 90's and the plants are starting to feel the stress.  Our dry conditions may surprise our neighbors in the counties to the west and south of us because recently they had storms come through that dumped 4-5 inches of rain in just an hour or two.  But we sat here watching the weather radar and hoped for SOME of that and got basically nothing.
The tour of the July 18, 2011 garden goes something like this:


Cucumbers as long as my hand 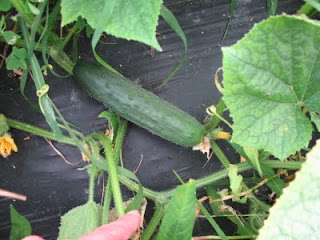 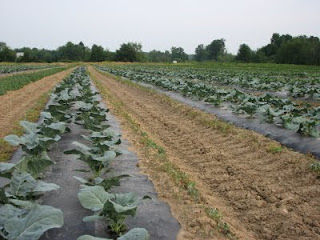 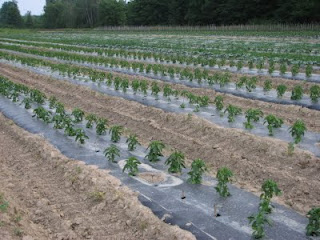 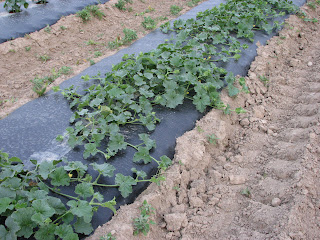 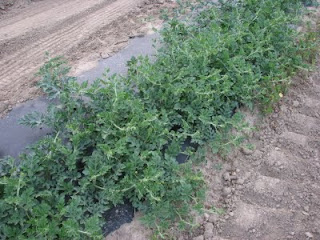 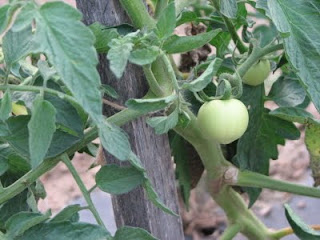 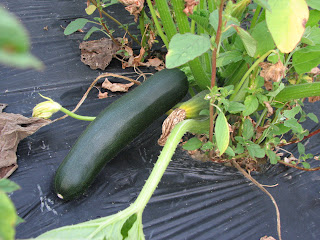 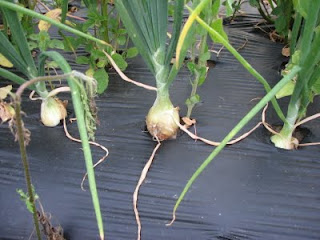 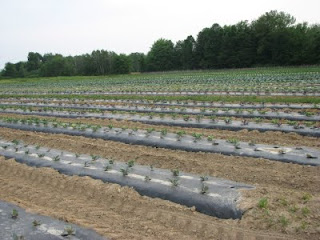 Gabby in the sweet corn (like I said, not so good, but later planted corn is doing better) 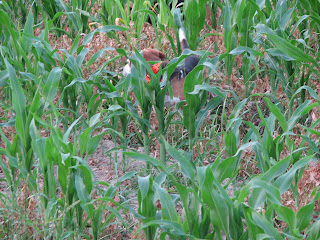 Gabby hanging out in the soybeans 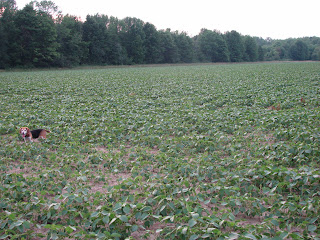 This blog is dedicated to next year when Mike once again is worried about how everything looks in July, but then turns out OK in August and September.  Grow, garden, grow.

Posted by Diane Hiener at 11:00 AM No comments:

Sometime the middle of last week, I was outside doing chickens chores when I heard a faint sound coming from the field across the road.  "bob whhhite"  "bob whhhite"  I've never heard a bob white quail singing except on a recording, but the sound was instantaneously recognizable.  I had to call Mike outside to listen with me because I could not imagine what I was hearing was true.  We don't have quail that live around here in northern Ohio.  At least I've never heard any or even talked to anyone who has heard any.  The explanation is easy though.  There are quite a few bird dog owners around and they will often raise quail and pheasants and use them to train their dogs.  Pen raised birds do not survive long in the wild, but occasionally one that is let loose will travel and stake out a territory.  Well, at least until they end up dinner for a hawk or coyote or a fox.  That is the fate of the wild quail too, but the wild born ones seem a little more adept at avoiding being a meal.

Friday evening our visitor Mr. Bob White came closer.  He was still in the field across the road, but was so close I thought maybe I could use my binoculars to see him in the mowed grass where he was sitting.  I couldn't.  Saturday morning I awoke to his song drifting through my open bedroom window.  He serenaded me all morning while I was doing my chicken chores outside.  In the afternoon I walked outside to get something from the garage and heard him again.  He was just as close, but this time was on our property.  It took me a minute, but I finally spotted him singing from atop a fence post alongside the pasture.


A little later, Mike and I found him in the driveway taking a dust bath.  He scurried away when I went out to start evening chores, but a half hour later he was singing his song while sitting underneath one of the tractors.

I was kind of sad thinking about how he was singing his song to a world where there were no other quails to hear him.  But I also know that his life will not be wasted.  In nature, not much if anything goes to waste.  I'm glad that little quail came by and blessed our farm with his song even if for a very short while.

I looked back in my blog from last year and except for some late started broccoli plants (which we don't have this year), the transplanting was finished on July 1st.  Well, we are not quite finished this year, but we are down to one wagon full of flats.  It won't take long to finish, but it also won't get done until after the holiday weekend.

The meat birds are almost 8 weeks old now.  Normally we would be butchering them next weekend, but half of our butchering crew is out of town or busy so it will be two weeks before we butcher.  The cockerels especially should be huge roaster sized chickens by then.

And last but not least, one of my favorite wildflowers, Ox Eyed Daisies, are in full bloom around the edges of the yard and fields.  I know they are non-native, but I love these flowers.

Posted by Diane Hiener at 9:54 AM No comments: